MA - Golden Eagle and another Rough-legged Hawk in Buckland 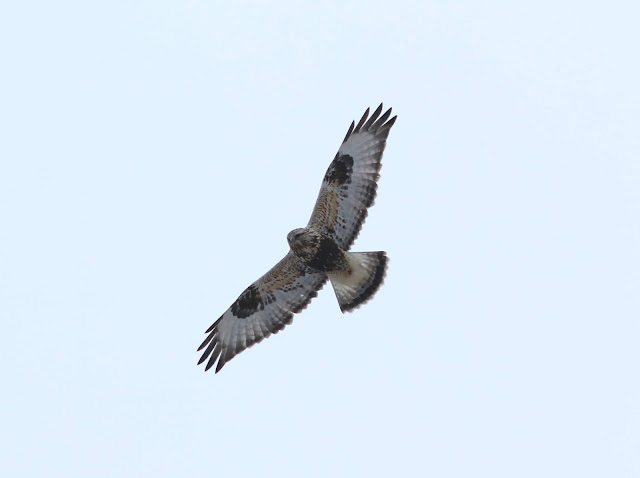 Another Sunday and another family visit to Berkshire East Mountain Resort in Charlemont. After dropping off Matan for some snowboarding I drove the quiet country roads around Heath hoping for a perched raptor, maybe some irruptive finches, or perhaps even a few Bohemian Waxwings. The day was exceptionally quiet and I actually didn't see a single bird other than a few Black-capped Chickadees visiting a feeder in Heath Center.  As the breeze started to pick up and I elected to take my chances at the Deerfield River overlook on the Mohawk Trail, a spot that has recently produced two locally decent  raptors in the form of a Rough-legged Hawk on January 8th, and a Golden Eagle on January 27th. Both of these beauties happened to be juvenile/first-winter birds and both were obliging enough to stick around and be seen by multiple observers - nice! 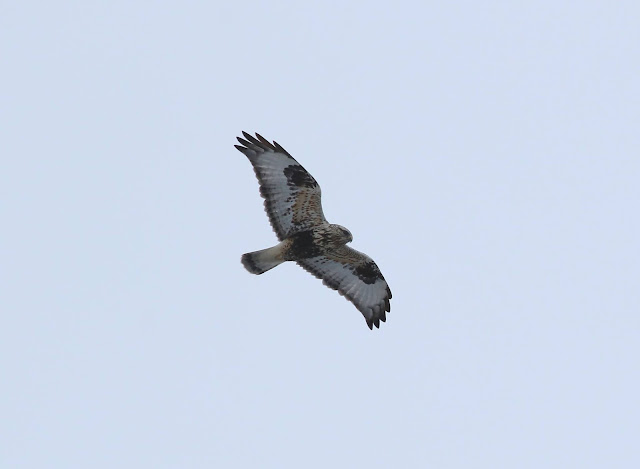 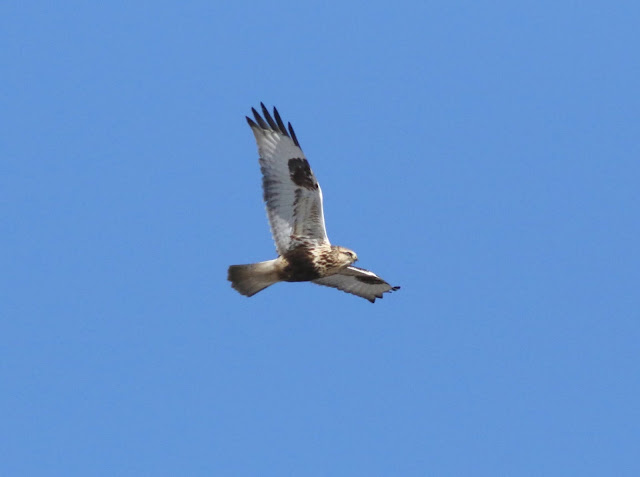 Arrival at the overlook was immediately greeted by a Rough-legged Hawk, remarkably similar to my experience on January 8th. Moreover, like the January 8th bird, it was a light morph but as I watched it pass over the Mohawk Trail I noticed a few subtle differences. Some six weeks had passed since the last confirmed sightings of that bird originally found by Brendan Murtha on January 7th. Even so, I'd barely had time to contemplate the idea that the Rough-legged Hawk in view might be a new individual when I picked up a distant high-flying raptor gliding to the NW. As I followed it in the scope it banked before hitting an updraft revealing a stark white tail with a thick black terminal band. It was the immature Golden Eagle! After briefly circling it continued gliding into the NW breeze before losing height as it headed towards Heath Center. 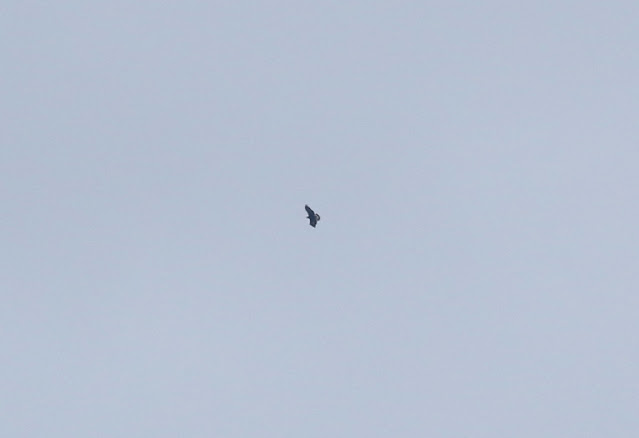 Conditions seemed to be so good for raptors that I hung around the Deerfield River overlook scanning for the next three hours. While there was no further sign of the Golden Eagle, I did have prolonged views of the Rough-legged Hawk confirming my original thought that it was an older individual than the first-winter seen in early/mid-January.  Other raptors also included an immature Bald Eagle, a couple of Red-tailed Hawks and a distant Sharp-shinned Hawk but the afternoon really belonged to the magnificent Rough-legged Hawk that put on a wonderful show. 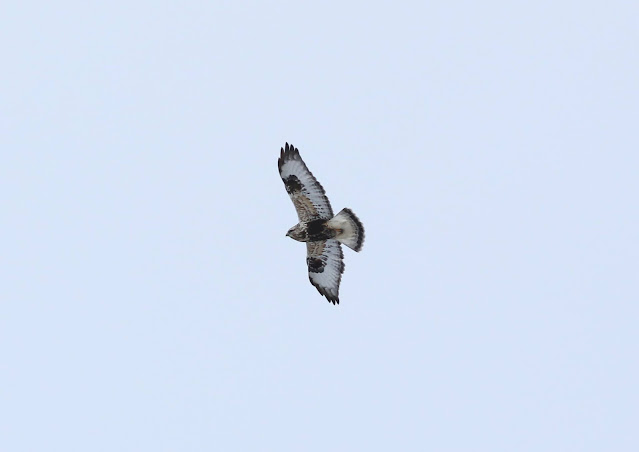 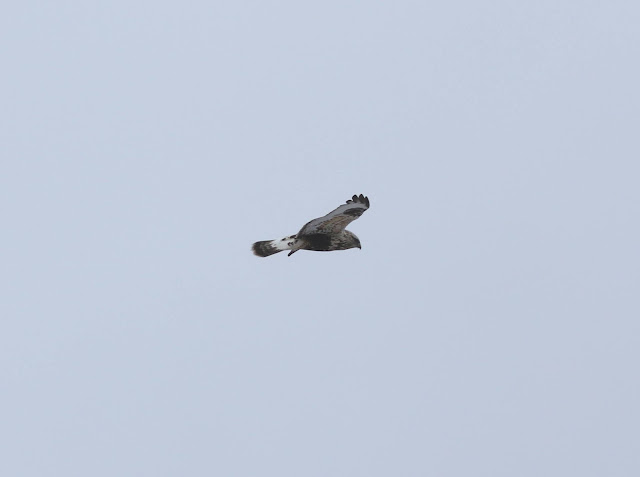 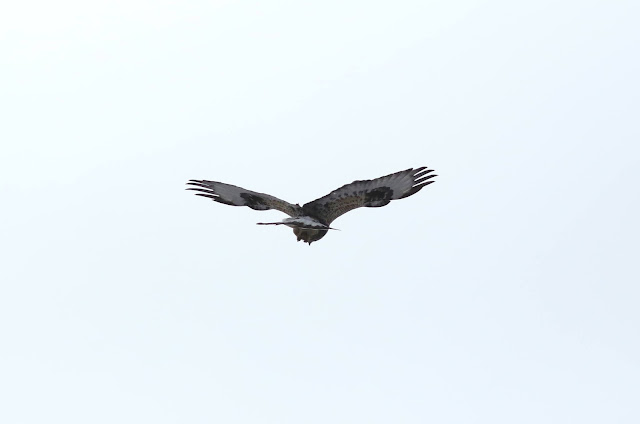 Rough-legged Hawk (light morph) - Buckland, Franklin Co., MA. February 14th, 2021. Possibly sub-adult.
The following day (Feb 15th), I spent some time driving the area hoping for either the eagle or the Rough-leg but didn't come up with either perhaps due to poor weather, though I did come across a nice Barred Owl perched out in the open. 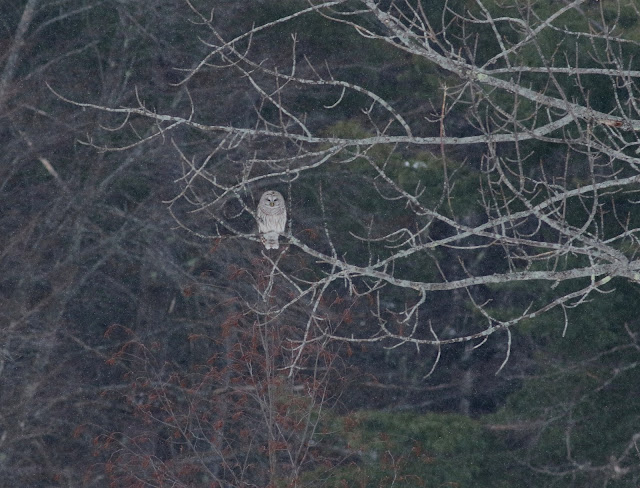