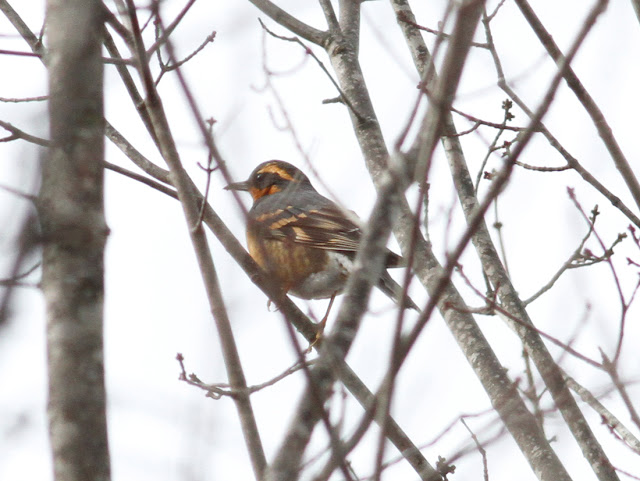 No question about it, the banner bird for the month was the New York State Ross's Gull. As so often happens, the first month of the year was excellent for birding in the 'greater' New England area and January 2017 was no exception. Altough I was desk-bound and couldn't spend a lot of time in the field this month, the birding trips that I had were both productive and enjoyable. Even the last day of the month rustled up fine but brief views of the long staying Varied Thrush in Westport Village, New Hampshire, just twenty minutes up the road from my home in Northfield. 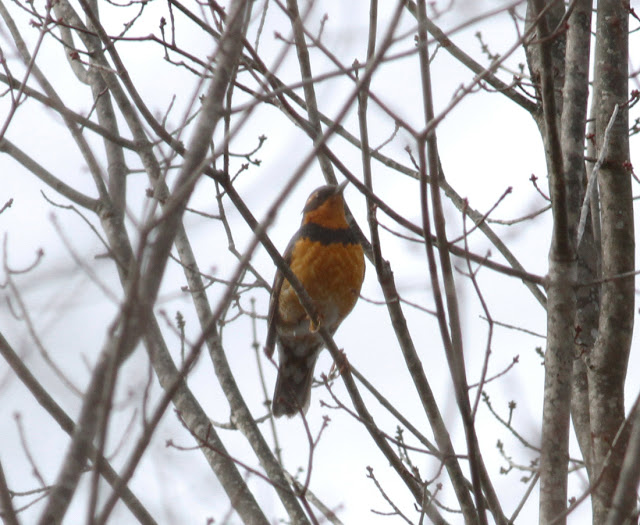 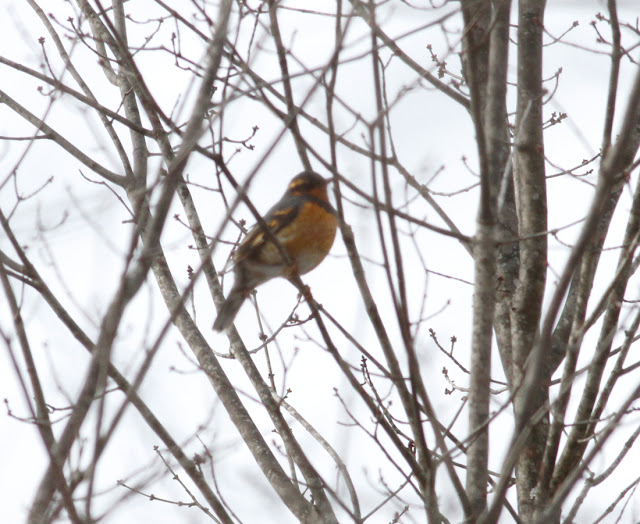 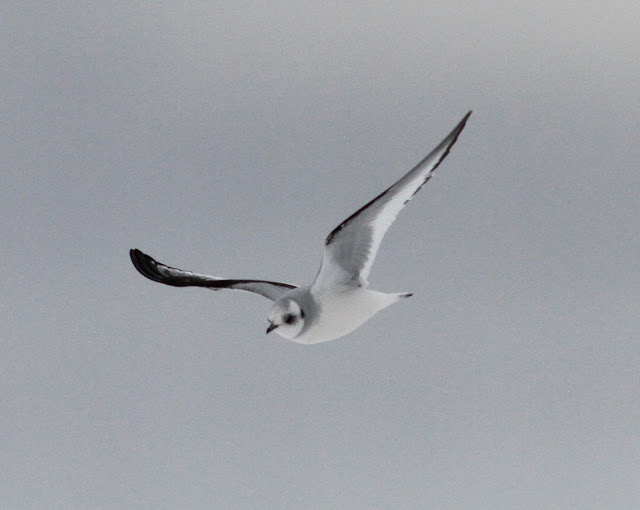 At Turner's Falls, gulls numbers and the presence of pale-winged gulls fluctuated throughout the month but usually 1- 4 Kumlien's Iceland Gulls joined the gull roost along along with a first-cycle Glaucous Gull on Jan 7th. An adult Lesser Black-backed Gull continued being pretty consistently present in the gull roost on most evenings and was joined by a first-cycle bird on Jan 31st. 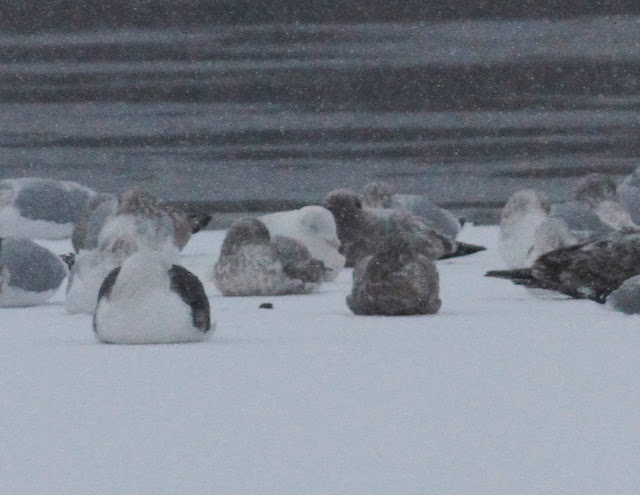 Less than usual waterfowl at Turner's Falls included the continued presence of male Greater Scaup and Ring-necked Duck, and a female Bufflehead (with Common Goldneyes) throughout the month, plus a rather smart Cackling Goose loafing around with Canada Geese at Unity Park towards the end of the month. At least two Belted Kingfishers also remained in the area throughout January. 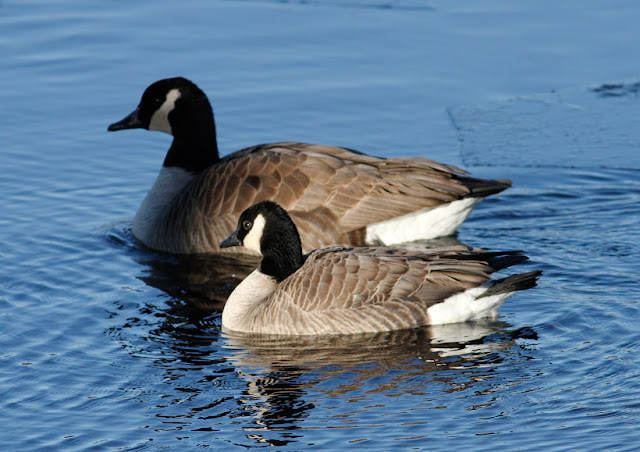 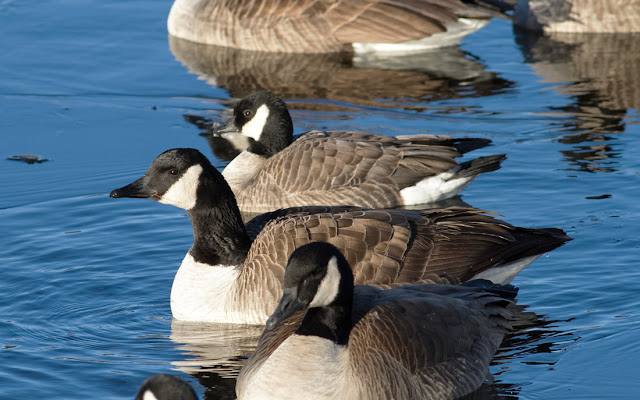 In Gill, well it's been fairly quiet though in truth I didn't actively bird the area too much in January, but I did continue to see Barred Owls throughout the month. There was also a Peregrine off Munn's Ferry Road on the 25th, and a Snow Bunting over North Cross Road on the 15th, the latter two being slightly unusual in rural Gill. 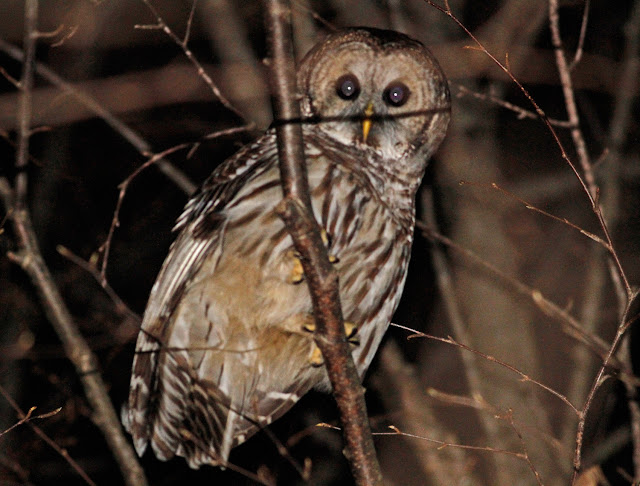 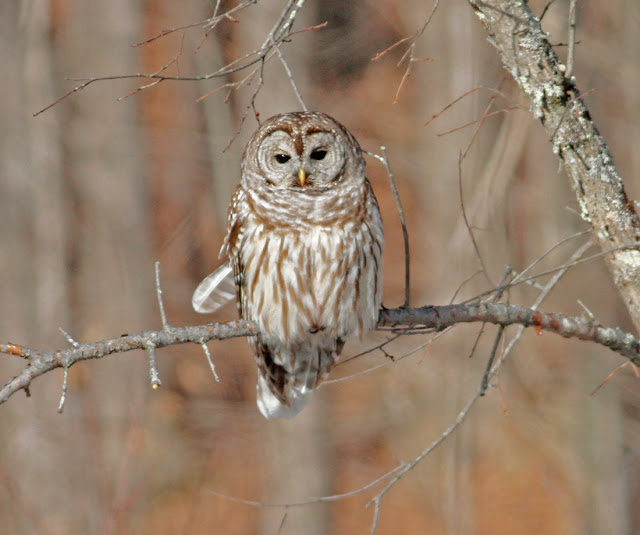 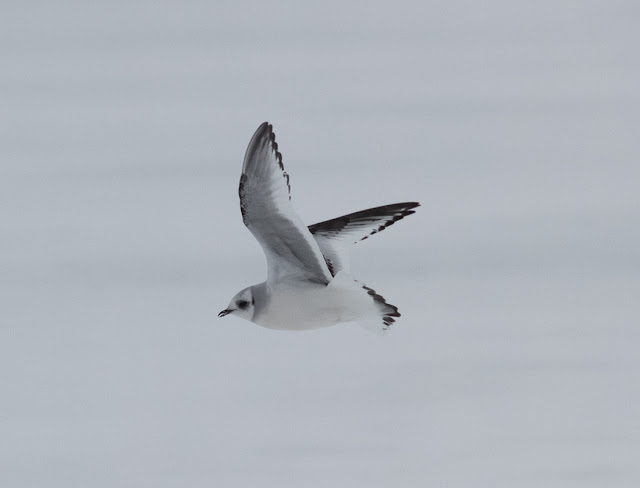 Last Thursday (Jan 26th) Nick Bonomo posted news of a Ross's Gull being seen at Tupper Lake in the Adirondacks, New York State. Nowadays, I don't dwell too much on reported rarities but I would have to confess that Ross's Gull has been at the top of my 'most desired' birdlist for some time. The location was four hours drive from my home in Northfield, just about on the limit of how far I'd be prepared to drive for a bird in a single day. But this was different, it was a Ross's Gull and when Scott Surner suggested that we try for the bird on Sunday (Jan 29th) there was no way that Brian Kane and I could turn it down.

We arrived at Tupper Lake boat ramp at about 10:30 hours and found the Ross's Gull straight away, thanks to a tiny handful of birders already there. The entire experience was just perfect. It was literally the only gull present, delicately picking at the surface of the ice and eleganting careening through horizontal snow showers, a situation seemingly totally appropriate for a true denizen of the Arctic. We were treated to the most fabulous display for next 90 minutes and left feeling totally awestruck. Quite simply, as an experience, it couldn't have been any better. 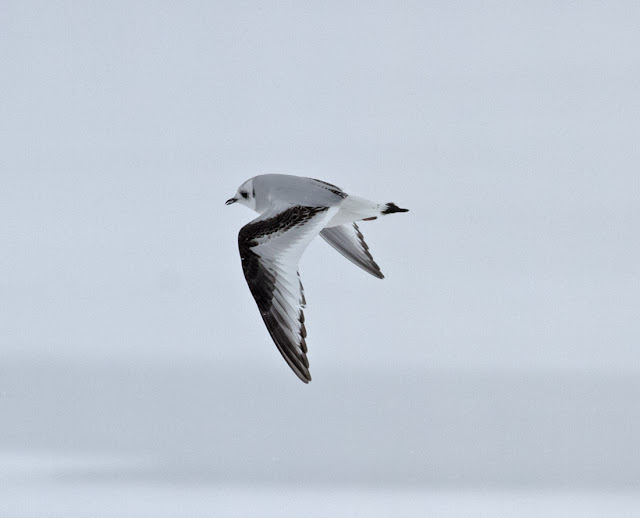 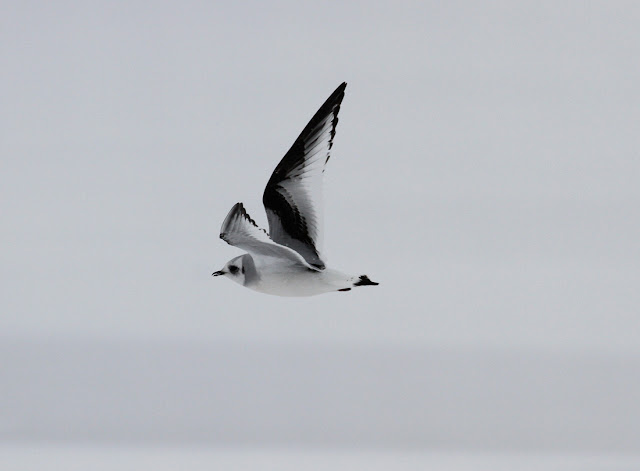 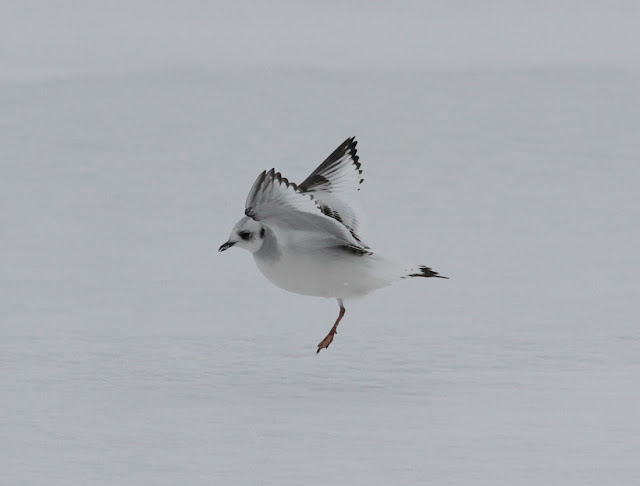 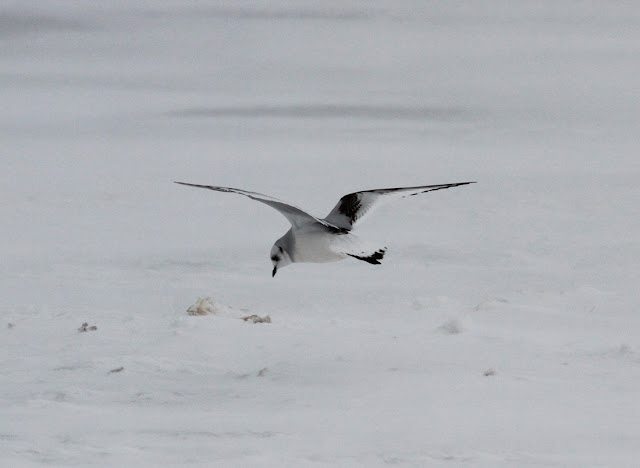 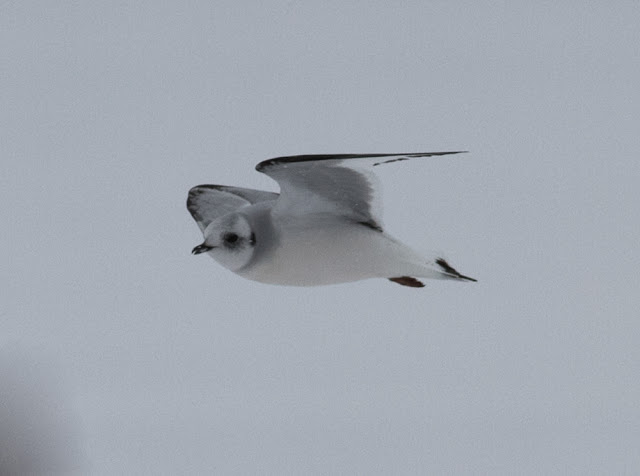 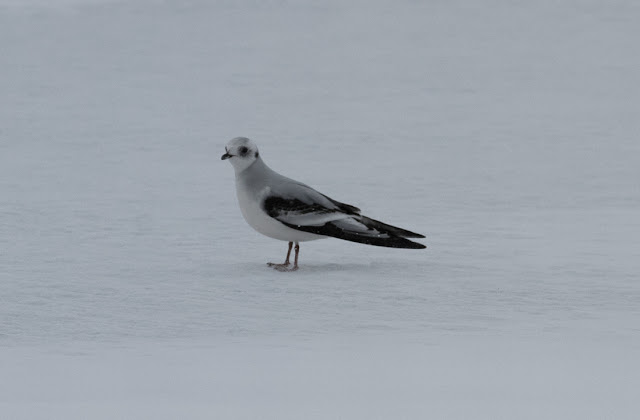 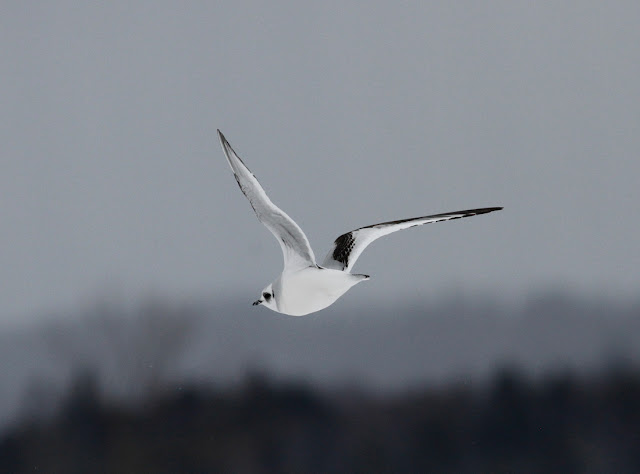 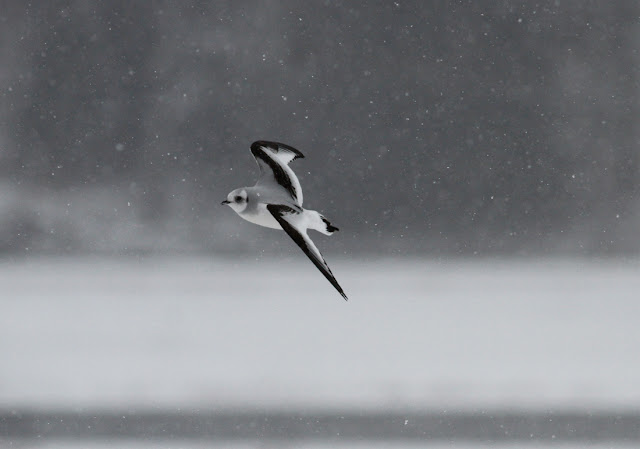 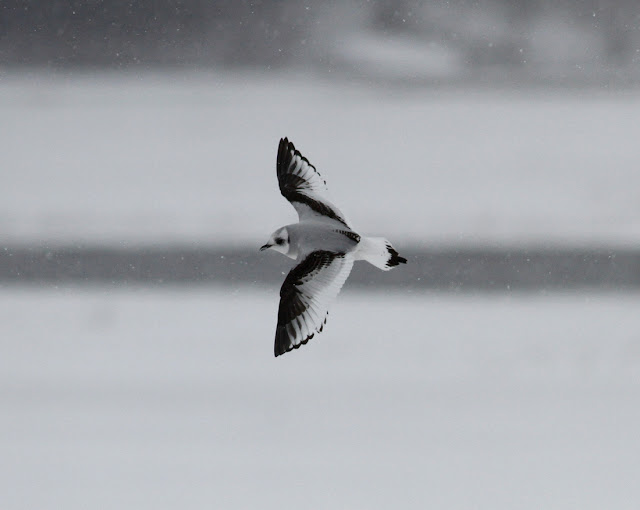 Gracious thanks to the initial finder and the continued updates from field observers, and especially to my field companions Scott and Brian. Even the sobering sight of a road-killed Northern Saw-whet Owl on the journey home did little to sour the euphoric mood in the car. What a day that was! 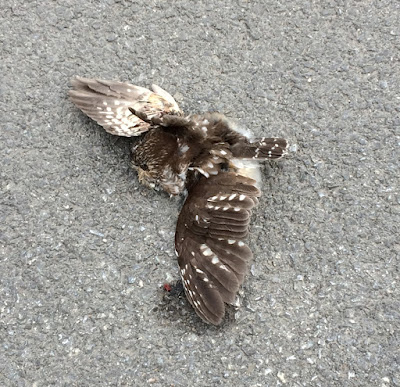