MA - Red Crossbills and Red-breasted Nuthatches on the move

August 15th brought a cool, north-easterly airflow and a welcome end to a prolonged spell of heat and humidity. It really felt like fall had started and there were even small kettles of Turkey Vultures and Broad-winged Hawks, as well as a juvenile Merlin to be seen at Turner's Falls Airfield that day. The 16th was equally cool and comfortable and Hell's Kitchen supported a small but enticing selection of shorebirds including 5 Least and 1 Solitary Sandpiper, a Lesser Yellowlegs and at least 12 Killdeer. A post breeding flock of at least 15 Killdeer continued to linger at Turner's Falls Airfield as well.

But the real story revolved around the build up of several irruptive species throughout northern Franklin County, especially Red Crossbills. I've now heard and seen crossbills every day since July 31st. Sightings appear to be completely random and almost always involve flyovers will a general movement toward the SW. Flock sizes have not been large ranging from two to nine birds and actually involving quite a lot of singles. Since August 8th I've found them at numerous sites in Gill, plus Hell's Kitchen in Northfield, Millers Falls, Sunderland, Montague and Wendell. Sound recordings from about 15 observations and all have been identified as 'Type 10' by Tim Spahr and Matt Young after analysis of the 'kip-kip' flight calls. It's fantastic having these birds in our area, especially so early in the fall, and with no signs of the influx slowing down it seems that we have plenty to look forward to in the coming weeks.

Mid-August also produced an especially noteworthy wave of Red-breasted Nuthatches with small numbers and singles occurring just about anywhere, and larger concentrations at Hell's Kitchen (15+) and North Cross Road, Gill (7+) over the 16th and 17th, and Highland Park, Greenfield (16) on the 20th.  Like the crossbills, I think we can look forward to more over the next few weeks with the potential for some quite spectacular movements and concentrations.  By comparison, the SW movement of Purple Finches over Gill and Northfield has been more subtle involving fewer birds and they have not been daily. However, the indications are there for a stronger passage in late August and into September. 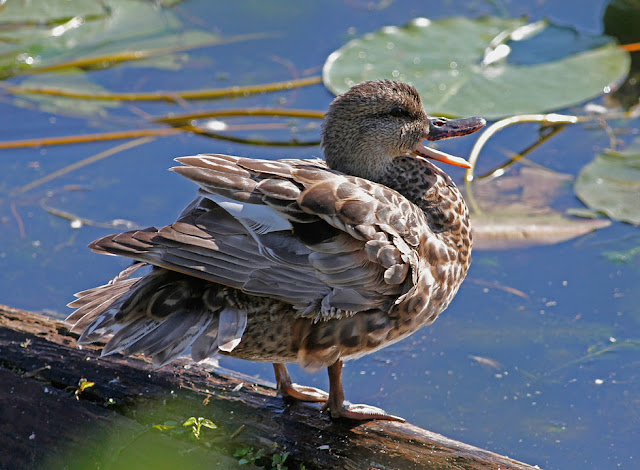 Historical image of what is presumably the same male back for another summer in 2020!

Ruby-throated Hummingbirds have graced our garden feeders in Northfield with up to eight in the yard at any one time, and on the 18th I noted four individual hummingbirds moving low over the water at Barton Cove heading in SW direction - those could well have been migrants. Barton Cove has also hosted several Great Egrets and, remarkably, what appears to be the same returning drake Gadwall back for another summer. It can usually be found loafing around with the Mallards off Unity Park and is likely to stick around for several weeks. 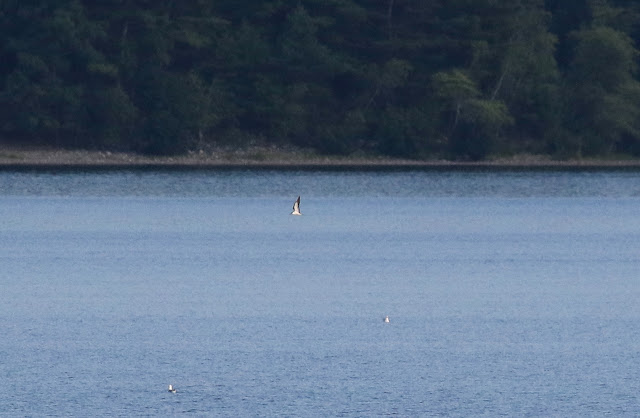 Although Tropical Storm Isaias failed to deliver any detectable storm-driven birds to northern Franklin County, Worcester County fared much better with 4 Sooty Terns discovered by Sean Williams at Wachusett Reservoir on the afternoon of August 4th. As much as I expected those birds to be gone in a heart beat, I was genuinely surprised to learn that two of them lingered well into the next day with one remaining all the way through to the 8th! With positive reports still coming through all day on the 8th, Susannah, Matan and I decided to make a dash for Wachusett Reservoir late in the afternoon, hot on the heels of Josh Layfield's success earlier in the day. 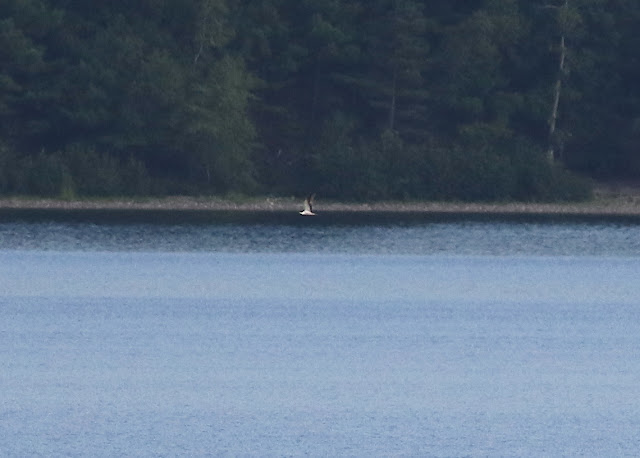 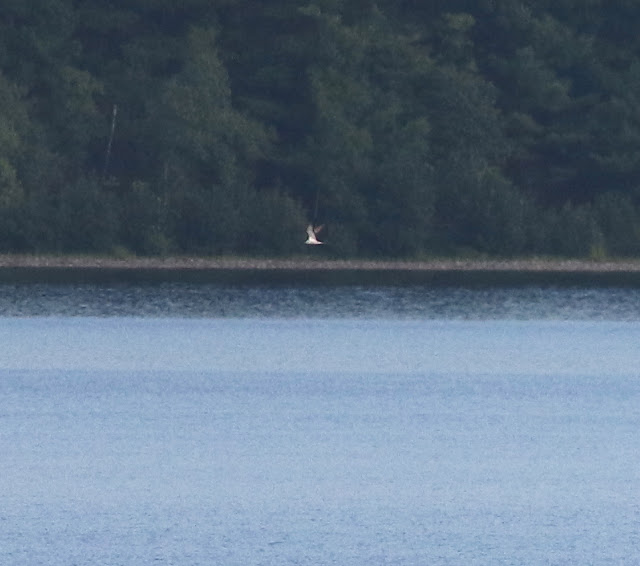 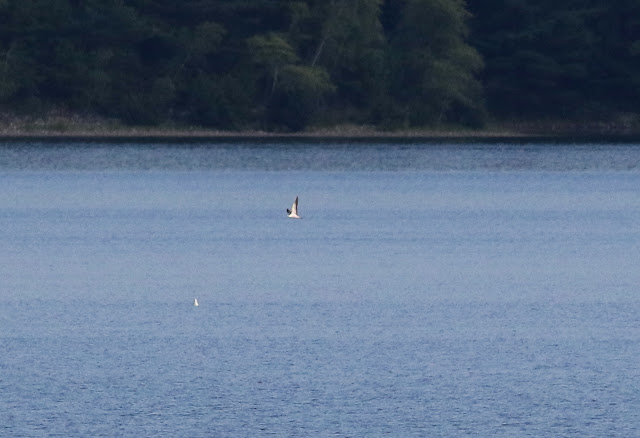 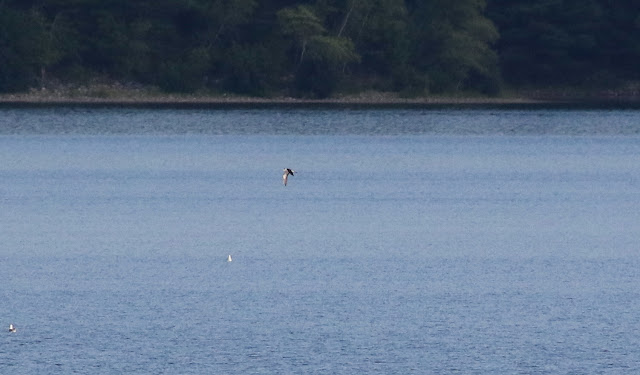 On arrival the scale of the Rainbow Cove was something to behold, and that was only a small portion of the reservoir!  Twenty anxious minutes passed with no sightings of the tern but we were very kindly and reliably informed by a couple on site that the bird was still foraging in the distance......seconds later there it was - a beautiful crisply plumaged adult Sooty Tern! We watched for a while as it made many passes up and down on the far side of the cove, gaining height at times and soaring/towering on down-curved wings reminding me a lot of a shearwater or petrel. At times it even soared above the tree line only to glide back down again on bowed wings. The bird looked healthy and strong with no obvious signs of weakening and the often sad end that befalls many stranded pelagic birds.

Almost all my experience of Sooty Tern comes from Florida where I've seen thousands over the years at the Dry Tortugas but getting to see one just an hour from home and only 35 minutes east of the Pioneer Valley was an unexpected bonus and I'm very glad we made the trek to see it. Gracious thanks to Sean Williams the finder and all the birders who posted timely ebird reports as well as Josh Layfield who gave us up the minute information on logistics and the bird itself! 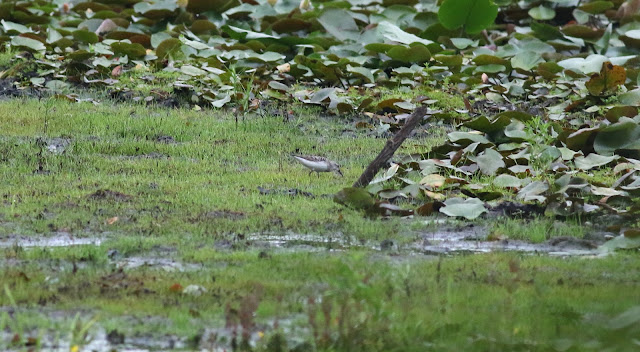 Semi-palmated Sandpiper (adult) - Hell's Kitchen, Northfield, Franklin Co., MA. August 2nd, 2020.
In the first week of August, Hell's Kitchen in Northfield remained a reliable spot for small numbers of shorebirds including Killdeer, Least and Solitary Sandpipers but an adult Semi-palmated Sandpiper there on the 2nd was far less usual and my first of the fall locally.
Tropical Storm Isaias was the most significant weather event of the week bringing thundery, squally showers and damaging wind gusts late in the day on the 4th but sadly, in terms of northern Franklin County, there were no major fall-outs of seabirds while both Worcester and Berkshire Counties enjoyed significant arrivals of Sooty Terns. The best bird at Barton Cove during the storm was an unidentified white heron, either a Snowy Egret or juvenile Little Blue Heron first spotted by Josh Layfield. Unfortunately, the views were brief and in flight, and we were unable to settle on an identification but either species would have been good for Franklin County. The day after the storm, August 5th, did produce 6 Double-crested Cormorants and 3 Ring-billed Gulls but these and the two Great Egrets loafing around the cove were probably unconnected to the storm.
The avian event of the week, at least locally, was the continued and unabated movement of Red Crossbills through northern Franklin County with 1- 10 birds noted daily between the 1st and 7th at sites in Gill, Northfield, Bernardston and Deerfield. In most cases, these were of birds passing over heading in a South-westerly direction but the few birds seen foraging appeared to be feeding in White Pines. Matt Young of Cornell identified my sound recording from North Cross Road on July 31st at 'Type 10' and I'm hoping to get the results of a further sound recording taken from a single bird, also on North Cross Road, Gill later today. Other passerines of note this week included a Bobolink over Boyle Road on the 6th (most likely a migrant) and at least five Red-breasted Nuthatches at Hell's Kitchen on the 7th, probably a family of local breeders. 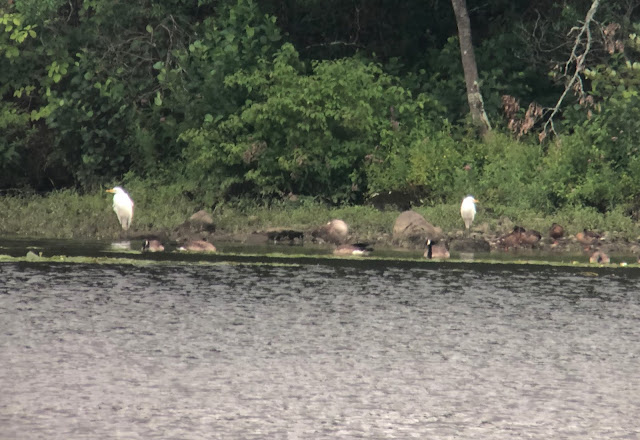 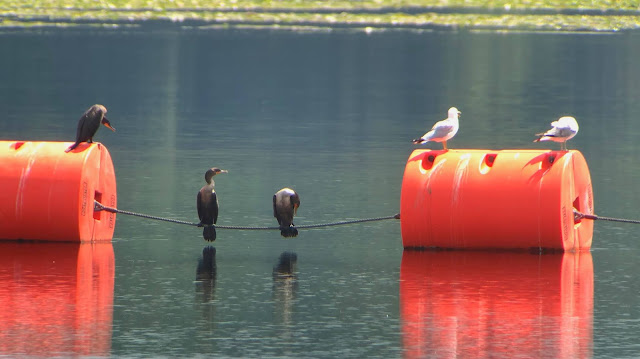 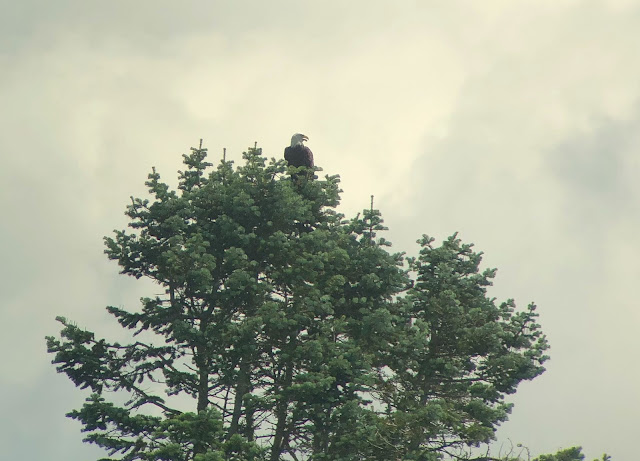 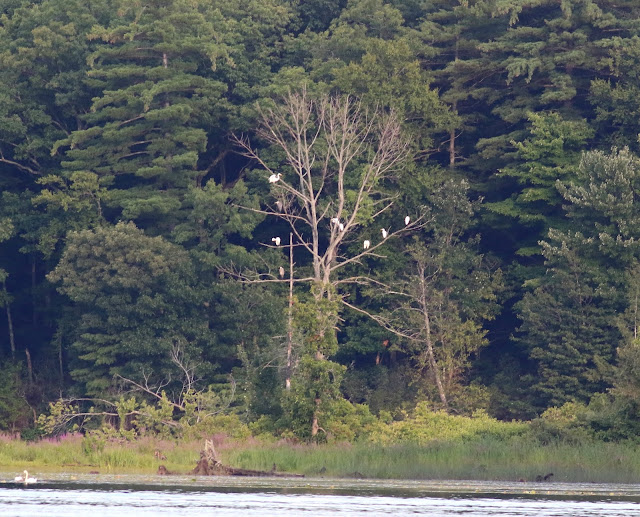 Great Egrets and Great Blue Herons - Barton Cove, Gill, Franklin Co., MA. July 29th, 2020.
Seven of the nine Great Egrets present forming an evening roost on Barton Island.
July went out with something of a bang as clear indications of an incursion of Red Crossbills became very evident on the last day with seven passing over North Cross Road in mid-morning, and at least one other calling and singing at Hell's Kitchen. Later that evening, I came across a further six Red Crossbills on North Cross Road feeding in White Pines with a similar number of Cedar Waxwings for company. The 31st also brought a singing Lousiana Waterthrush to our Northfield yard, quite a rare visitor in late summer/early fall and almost certainly a migrant.
Shorebird migration has been particularly evident in the last two weeks of the month with Least Sandpipers consistently present at Hell's Kitchen (2 - 3 birds) and also for a couple of days at the Turner's Falls power canal (10 - 15 birds on Jul 23rd and 24th). Being partially drained on those dates, the power canal showed much promise and also held a Semi-palmated Plover on Jul 24th. Similarly, Solitary Sandpipers were present at Hell's Kitchen (1 - 3 ) and at the power canal when water levels were drawn down. Unfortunately, power canal water levels went back to normal on the 25th ending a short but sweet spell for migrant shorebirds there. Rather less expected was a wandering, calling Greater Yellowlegs over North Cross Road on Jul 29th, the same day that no less than 9 Great Egrets showed up for an evening roost at Barton Cove in what has become a traditional late July build of that species in northern Franklin County. However, they were not present the following evening when a juvenile Bald Eagle had taken a liking to their preferred roost tree!
Breeding species continued to be of interest late into the month with a notably strong presence of Yellow-billed Cuckoos and Alder Flycatchers in Gill/Northfield and the successful breeding of Barred Owls for the third consecutive year on North Cross Road, Gill. And of special interest, confirmation of breeding Merlins at an unexpected location in Greenfield where a pair raised at least three young to the fledgling stage. I was lucky enough to be there with the finder just as some of the fledglings were taking practice flights right over her backyard! Although I've suspected breeding Merlins in the Gill/Turner's Falls area for years this was first actual nest and confirmation of breeding that I've come across anywhere in Franklin County......thanks very much to Tamsin Flanders for sharing the experience! 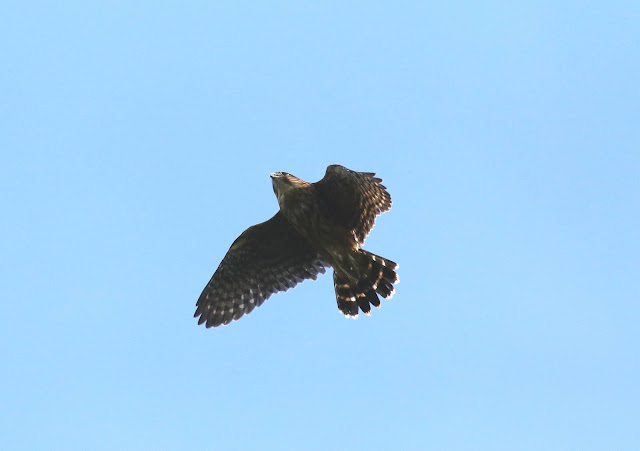 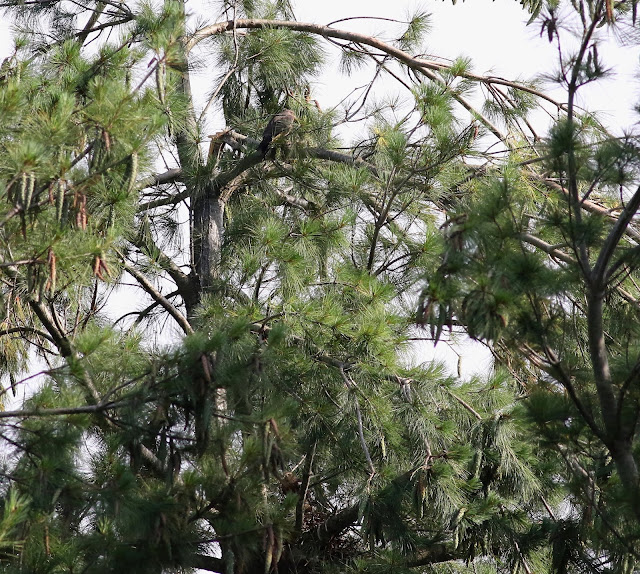 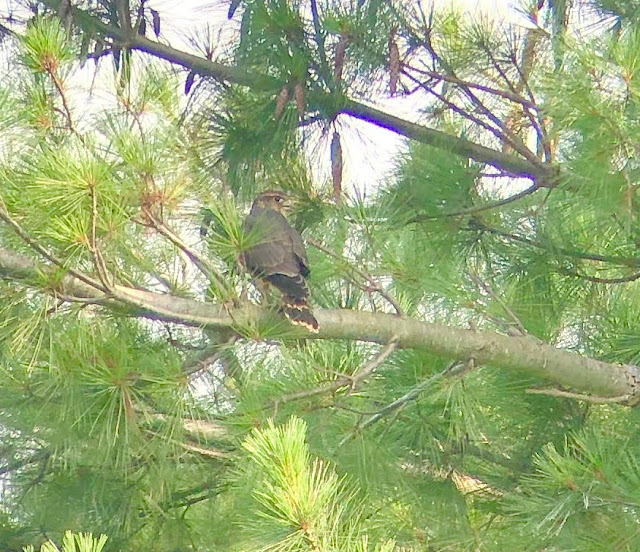