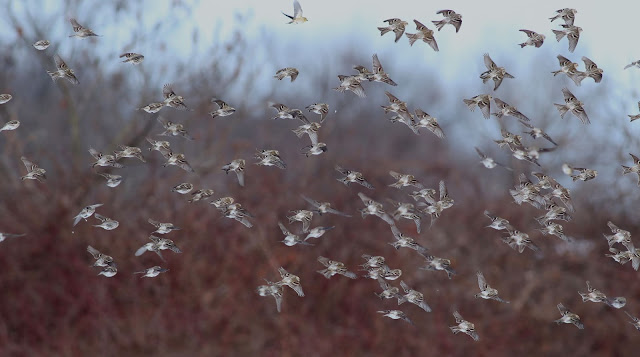 Common Redpolls - Whately, Franklin Co., MA. February 12th, 2021. Some of the 75 birds present.
Disconcerting numbers of pale/whitish rumped birds within the Whately flocks, most of them with variable amounts of streaking on the rump.

The fallow fields of Whately became the favored feeding haunt for fluctuating numbers of redpolls this week. While I'd noted redpolls in these fields on previous during the winter, February 6th produced only nine pretty skittish Common Redpolls so to find numbers had suddenly increased to c.300 birds on February 8th came as a genuine surprise. At that point I decided to check the flock more thoroughly and regularly with a view to keeping an eye on numbers throughout the week. February 9th was the biggest day with a minimum of 475 redpolls swirling about the fields during a winter weather event that deposited 2 - 4 inches of drizzly, wet snow over Franklin County. While the 9th was a tough day for actual observations, the fields had clearly 'sucked' in numerous redpoll flocks from the surrounding countryside that converged to form one impressive heaving mass. Numbers then dropped steadily during the remainder of the week (250 on the 10th, 120 on the 11th and 75 on the 12th). My morning session  on the 12th ended abruptly at 10:45 am when a Merlin swept through the fields dispersing the entire remaining flock of 75 birds. They headed off SW without returning. 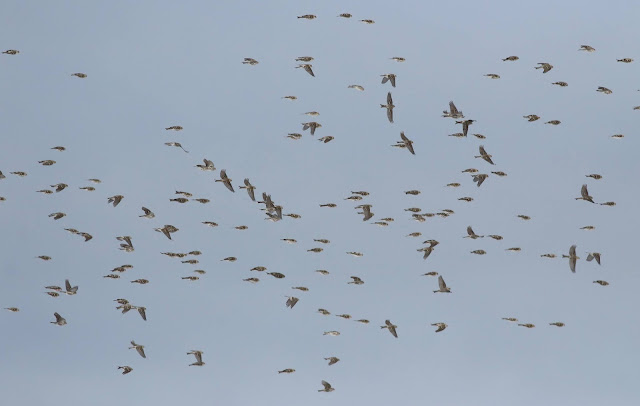 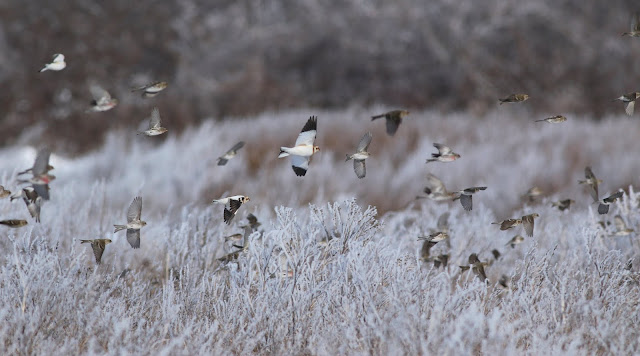 Common Redpolls and Snow Buntings - Whately, Franklin Co., MA. February 10th, 2021. Some of the 250 redpolls present on that specific day.
Out of focus but certainly worthy of a second glance, notice the huge, hulking dark brown redpoll to the right and rear of the middle Snow Bunting.
Surely a candidate for A.f. rostrata? 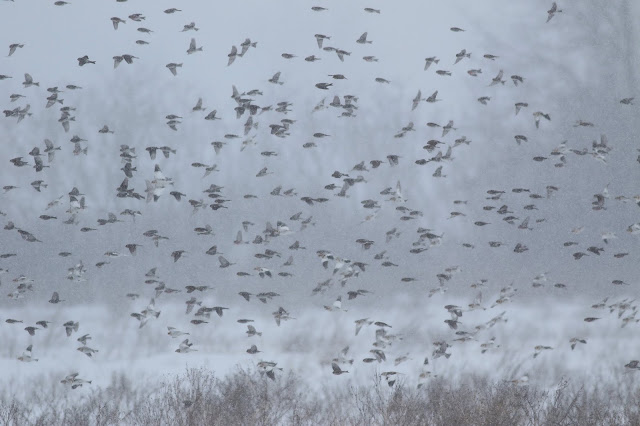 Common Redpolls and Snow Buntings - Whately, Franklin Co., MA. February 9th, 2021.
The biggest day of the week for numbers with some 475 redpolls present during a winter storm. 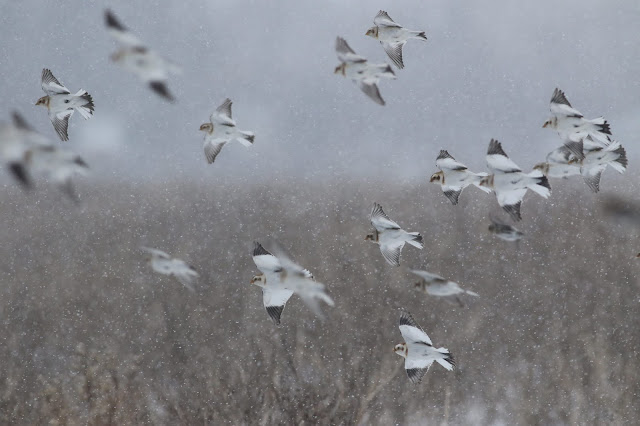 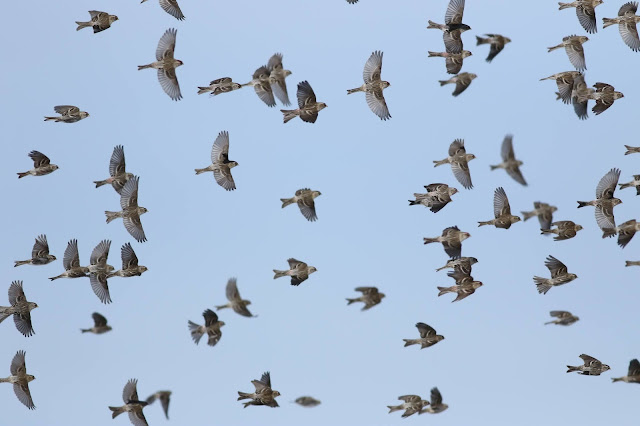 The large numbers of passerines within the Whately fields became a major draw for raptors too with the regular presence of 2 - 3 Northern Harriers, 2 - 3 Red-tailed Hawks and a Cooper's Hawk as well as the previously mentioned Merlin. Aside from the redpoll flock the fields were positively flush with other passerines and, while numbers varied from day to day, it was possible to see up to 120 Snow Buntings, 35 Horned Larks, 140 American Tree Sparrows, 65 Dark-eyed Juncos, 12 Savannah Sparrows, 12 Song Sparrows and about 9 White-throated Sparrows though the latter tended to stick close the surrounding hedgerows rather than the open fields. 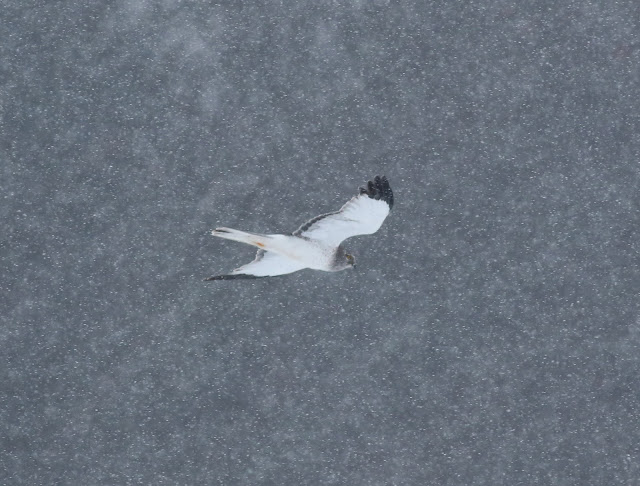 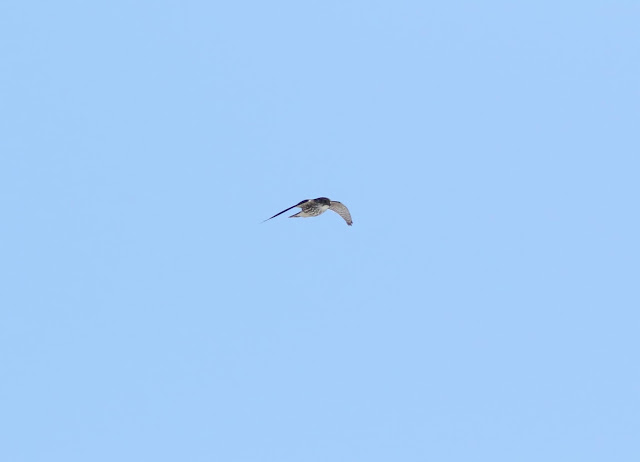 Merlin (female) - Whately, Franklin Co., MA. February 8th, 2021.
One of several raptors with a keen interest in the large numbers of passerines foraging in the fields. 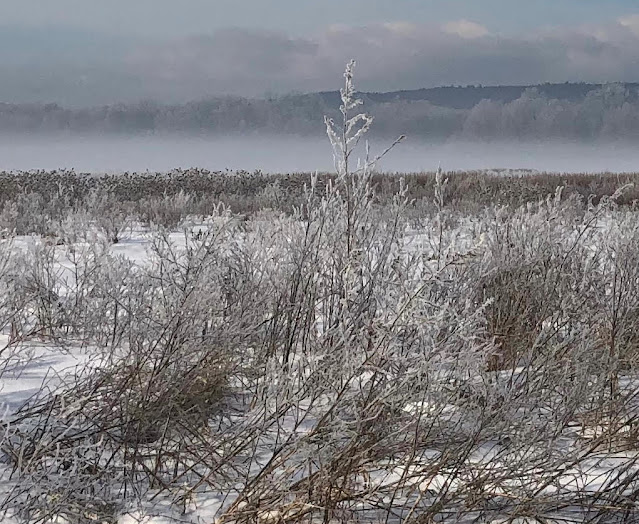