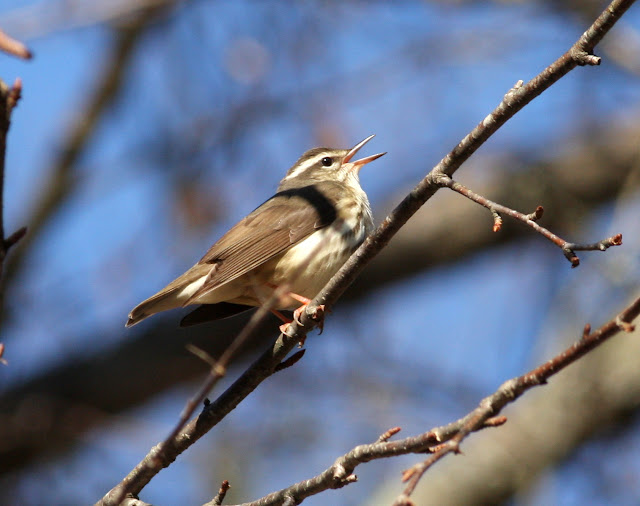 Yesterday, April 13th, really marked a turning point in the spring, hopefully bringing an end to the cold, wintery air that seems to have been with us for the last couple of weeks. Locally, there's no better indicator of the end of winter than the arrival of Louisiana Waterthrushes to our streams and rivers. Yesterday I heard three singing males along River Road in Gill, including the showy individual pictured here. 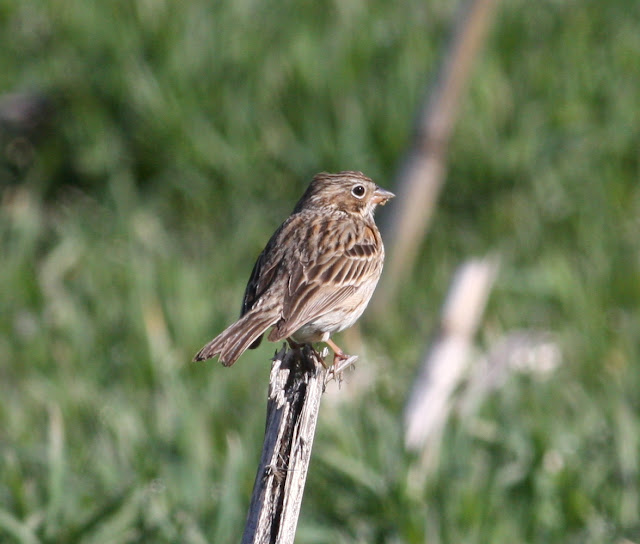 Perhaps more surprising was the appearance of a pair of Vesper Sparrows along North Cross Road, I think only the second time that I've recorded the species in Gill. The birds showed well, foraging at the roadside, quite literally at the side of the road. 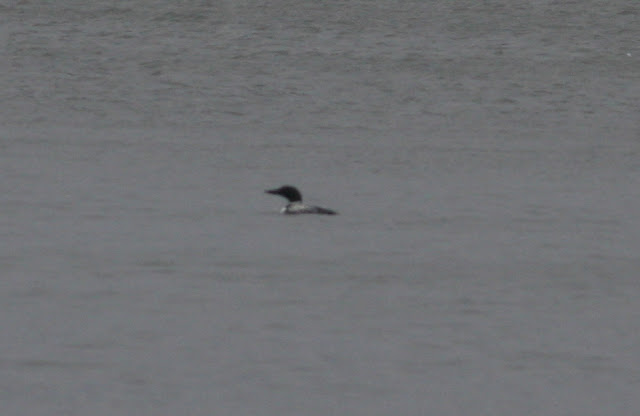 In the afternoon, I recorded no less than nine species of raptor from Unity Park in Turner's Falls including my first Broad-winged Hawks (3) of the year, along with a Black Vulture and a Merlin. Barton Cove itself has been pretty quiet aside from a single Common Loon and, after the first on April 6th, the daily presence of up to nine Double-crested Cormorants. 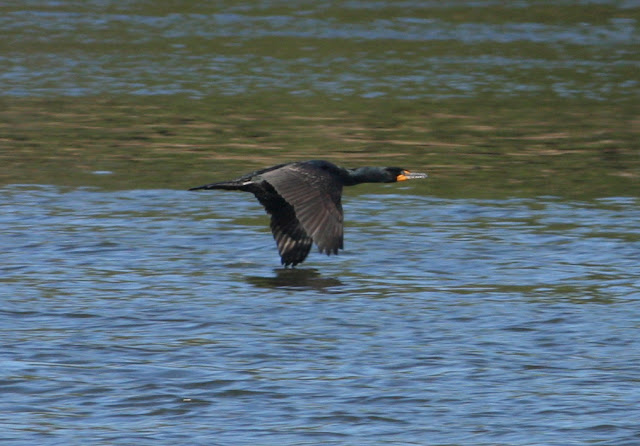 Widespread arrivals of more Eastern Phoebes, Pine Warblers, Field and Chipping Sparrows and Hermit Thrushes (including one in our yard on the 14th) have taken place in the last two days and their songs have been common place around Gill. A few Fox and White-throated Sparrows have also burst into song as they pass through the fields and hedgerows. North Cross Road in particular has been good for the former. 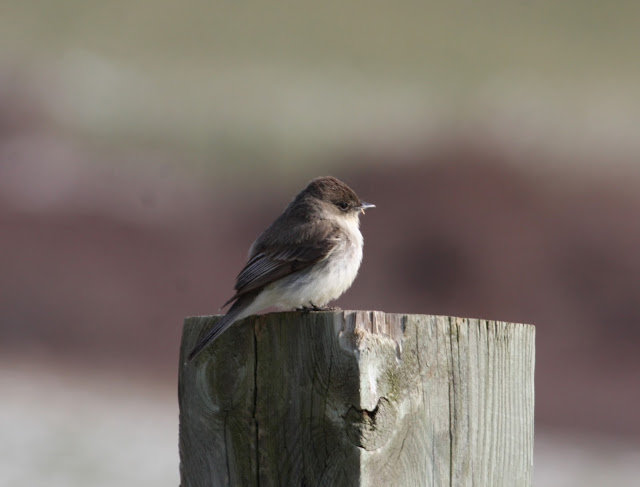 Finally, a rainy morning didn't put off a Ruffed  Grouse from an aggressive roadside display on April 12th. This bird quite literally charged at my vehicle when I pulled up to take a look. I became so concerned for its welfare that I gently encouraged it to retreat back into the woodland. Otherwise, it might easily have become roadkill. 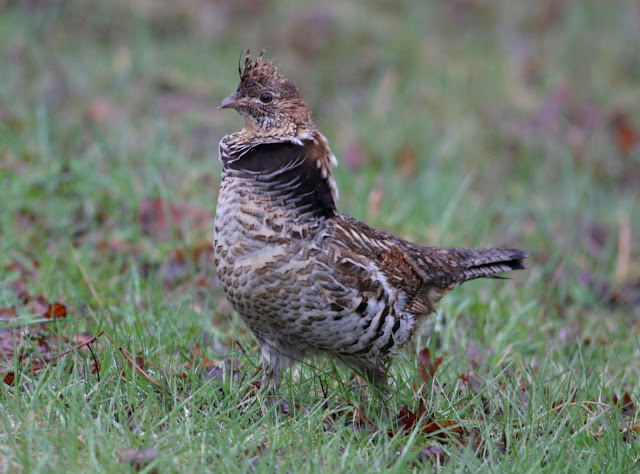 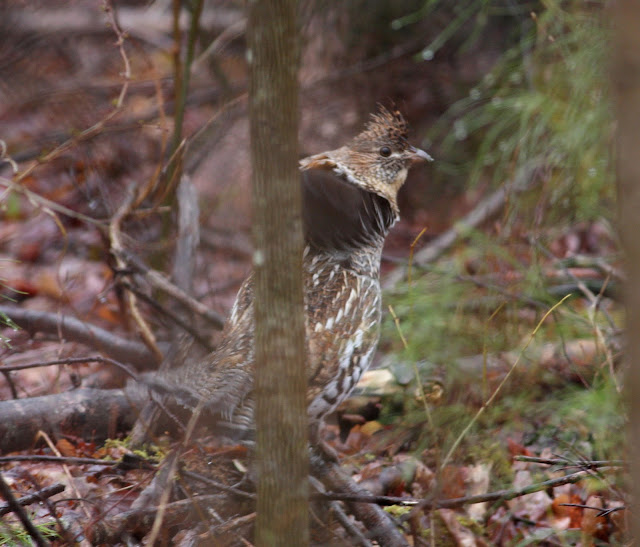 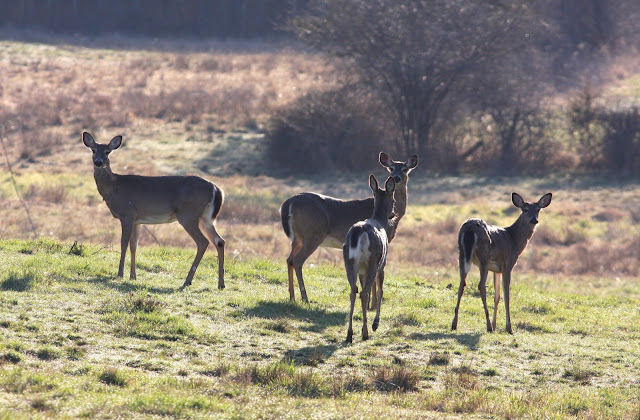 MA - winter hits back for a few more days 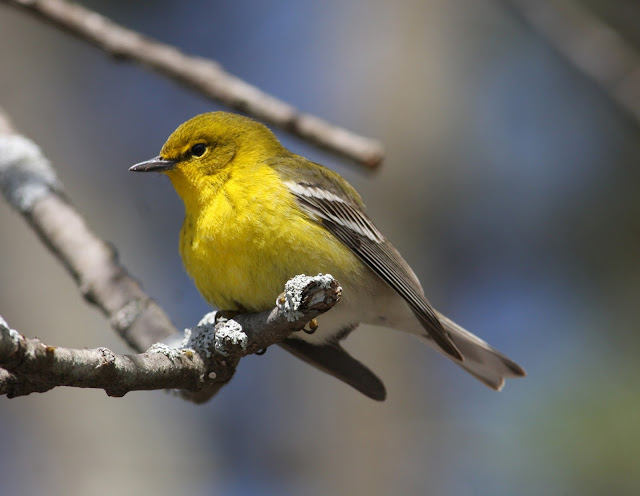 After last Friday's balmy 70 degree temperatures, winter hit back with a vengeance on Monday bringing about 5 inches of fresh snow followed by a very cold night with temperatures of around 13 deg F at dawn this morning. Even the hardiest of early migrants will shiver, or perhaps even perish under these conditions. But even so, Pine Warblers can still be heard singing from the woods around Gill and I heard two along a snow-covered Barney Hale Road this morning. Otherwise, it's been exceptionally quiet and migration, understandably, seems to be on hold for the moment. 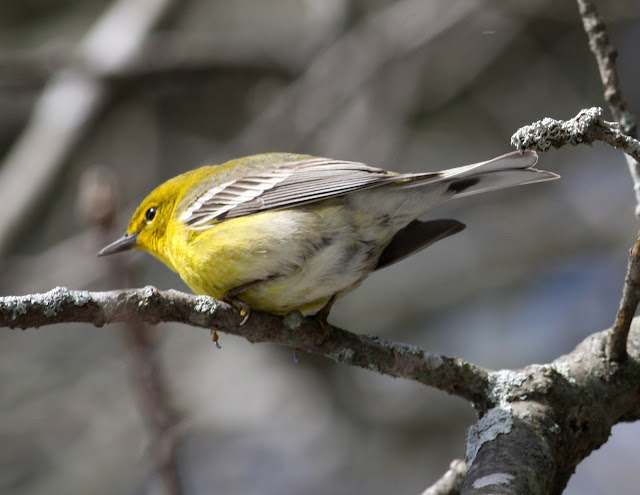 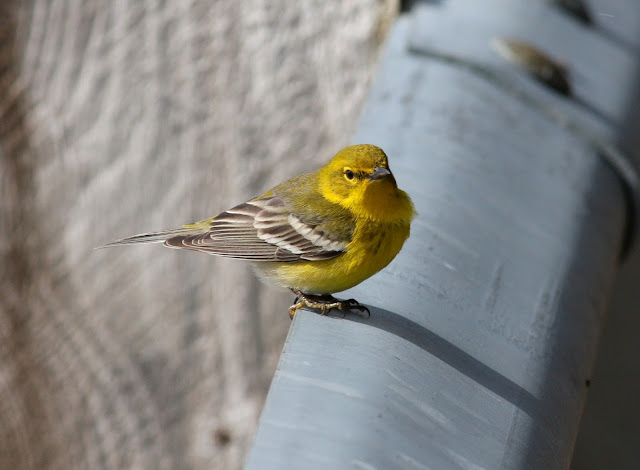 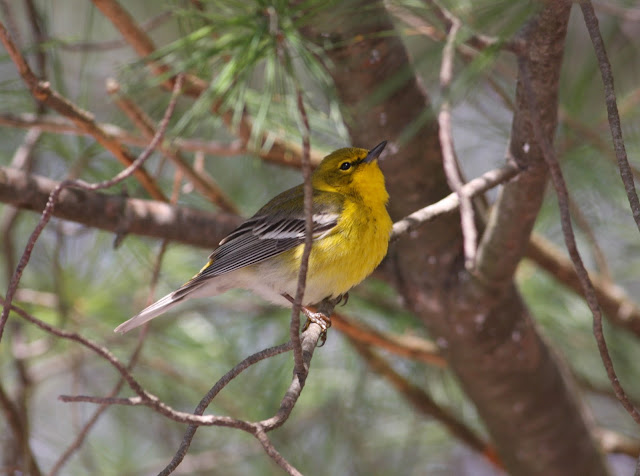 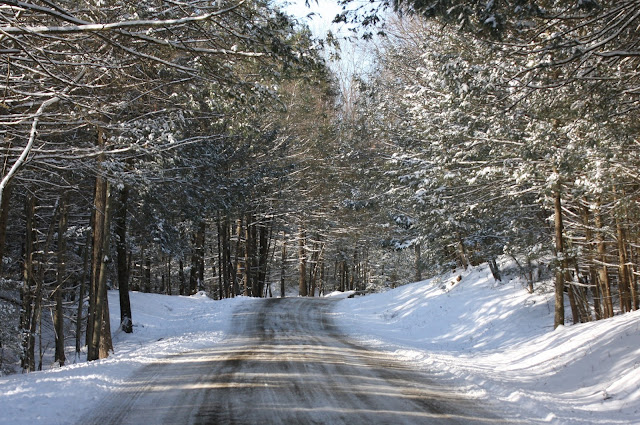 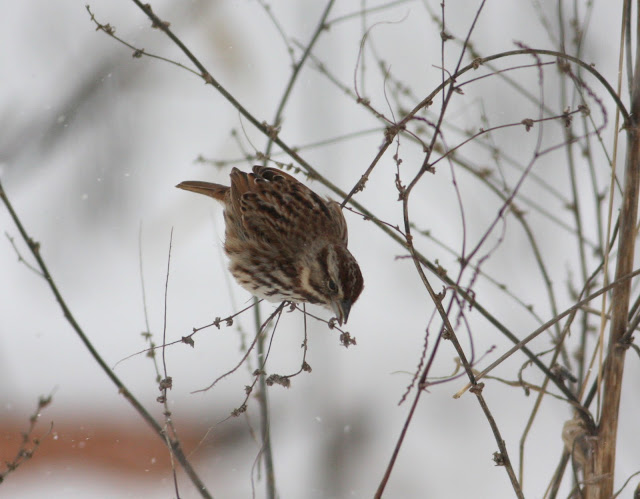 Fish Crows continue to expand around Turner's Falls and on Sunday I came across pairs on I Street and at the Turner's Falls power canal, that's in addition to the regular birds around the Cumberland Farm gas station and at Unity Park. Oddly, I'm not finding Fish Crows on the Gill side of the Connecticut River though they seem easy enough to find in Greenfield, especially along Federal Street. 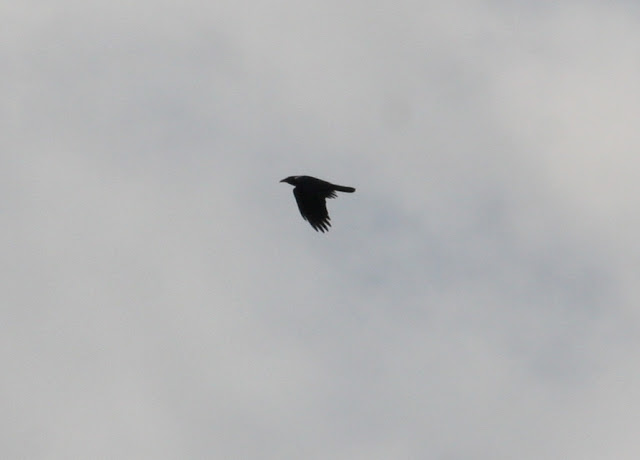 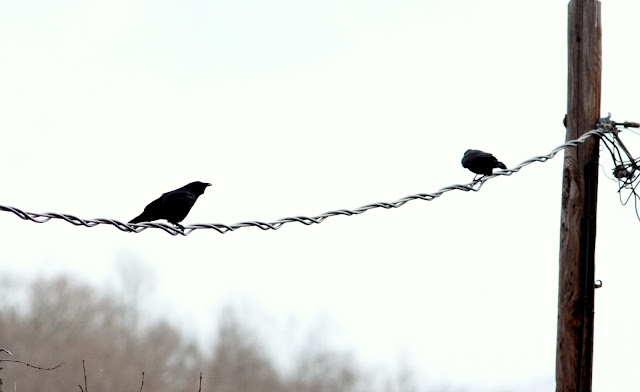 MA - another Osprey and widespread arrivals

The last two days (03/31-04/01) have been absurdly warm and balmy. A strong southern airflow has brought widespread arrivals of Northern Flickers, Yellow-bellied Sapsuckers, Pine Warblers, Swamp Sparrows and Chipping Sparrows to the greater Gill/Turner's Falls area. Eastern Phoebes seem to be absolutely everywhere at this time, even deep inside wooded areas. Less usual was a singing Hermit Thrush in woodland north of North Cross Road this morning and another Osprey, this one taking a fish right in front of me at Barton Cove boat ramp. Overall, however, Barton Cove remains eerily quiet with just two Ring-necked Ducks present today. 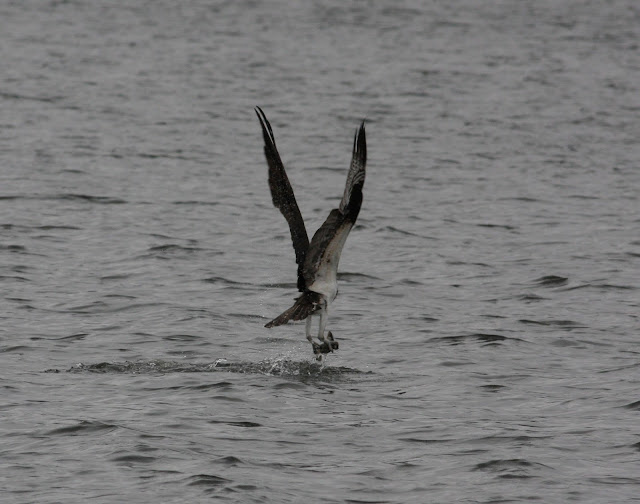 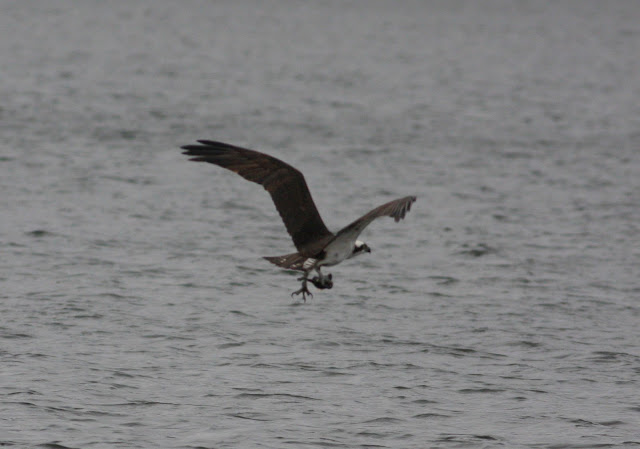 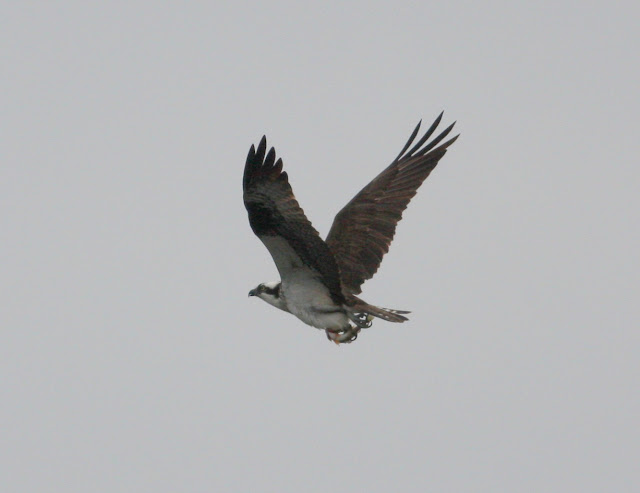 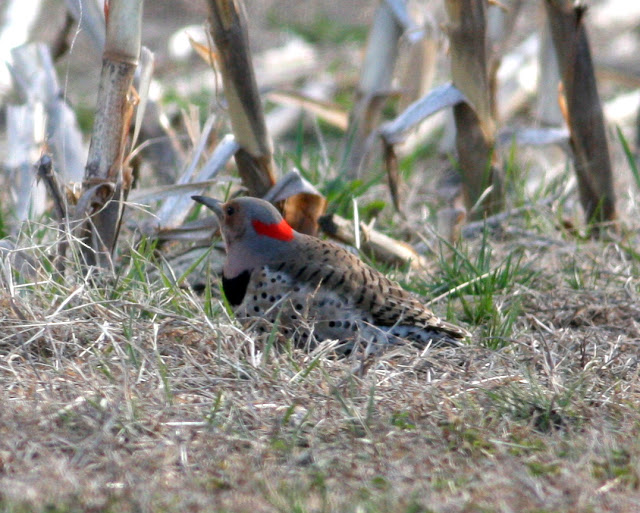 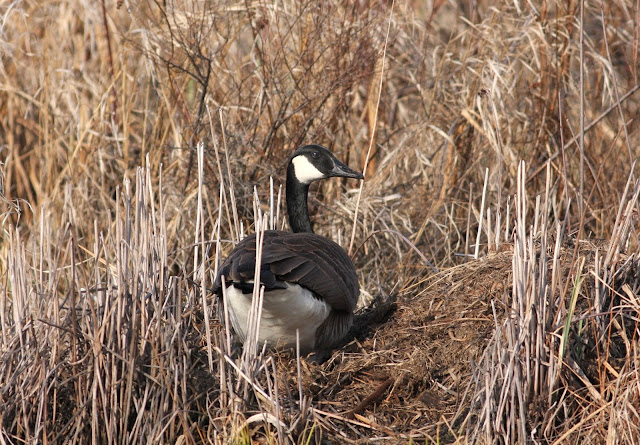 Other birds of interest around Gill included a Barred Owl on North Cross Road yesterday, plus two Golden-crowned Kinglets and a lot of Pileated Woodpeckers, very active and seemingly all over Gill at the moment.
Posted by James P. Smith at 5:17 PM 1 comment: