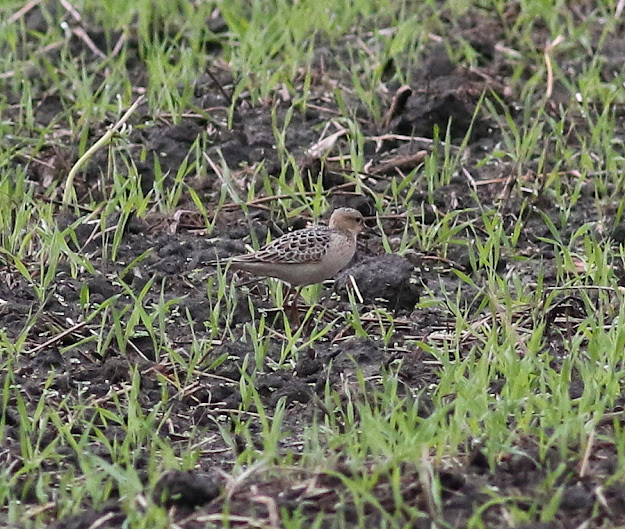 On Friday morning (Sep 11th) I'd planned to check some sites around Deerfield hoping for my first Connecticut Warbler of the fall. It was cool, overcast and blustery and quite the contrast to the previous day's warmth that had been coupled with muggy, thundery showers. Indeed the day before, I'd spent quite a bit of time looking for grounded shorebirds, in particular I had Buff-breasted Sandpiper in mind which I'd found under similar conditions at Turner's Falls back in September 2017. My prize for all that work was a single, calling, flyover American Golden-Plover at Turner's Falls and, despite checking all my local Killdeer flocks, there wasn't a hint of anything with them, least of all a Buff-breasted Sandpiper! 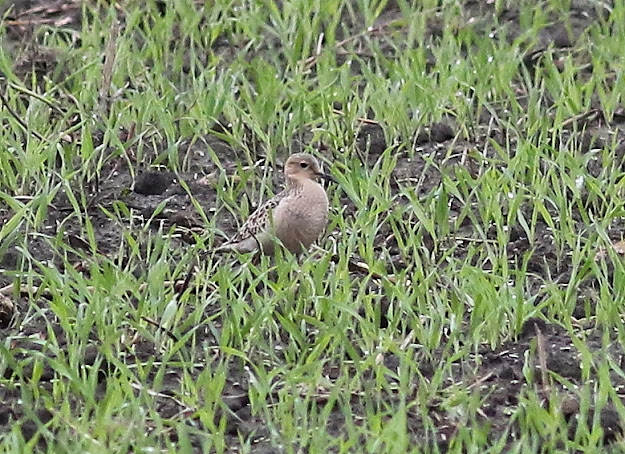 Just before heading out to Deerfield, I quickly checked ebird noticing that Ted Gilliland had come across a Buff-breasted Sandpiper the previous evening. It was a spot that I knew well having had several encounters with Buff-breasts along the same road only a little further south on the Hatfield/Whately town line. Those observations included one of seven together during Hurricane Katrina in August 2005! Since I was heading south I really didn't have too much to lose by quickly checking the fields where Ted had his sighting the evening before. It was tough, distant and the conditions blustery but after 15 minutes of scanning through Killdeers I eventually found the Buff-breasted Sandpiper, ultimately moving around to a more sheltered spot for better views. Close-up, it looked to be a nice crisply marked juvenile. Though September is most certainly 'the' month to look for this species in Franklin County it's rare enough to justify a local chase and I'm pretty sure this bird was only my second away from the former favored spot on the Hampshire/Franklin county line, and well worth the effort! 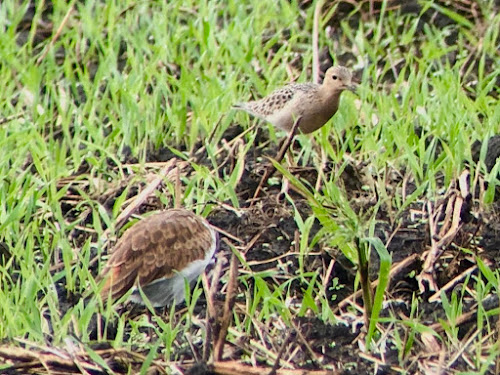 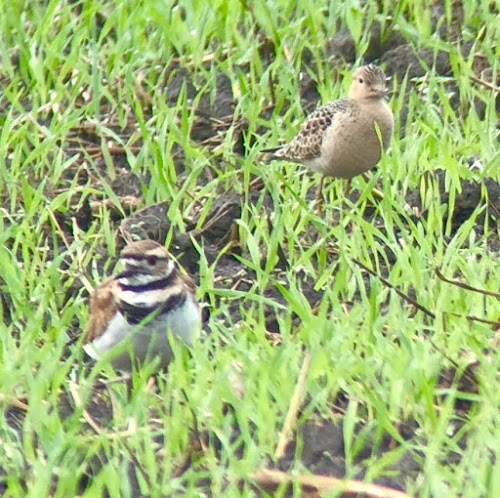 MA - opening up September with a Baird's Sandpiper! 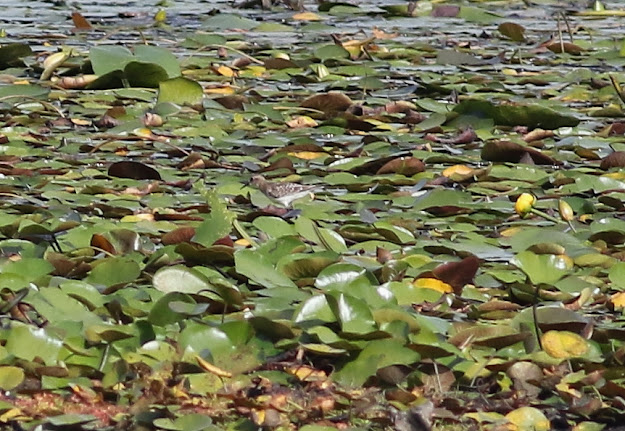 The opening ten days of September brought a flurry of good birds to northern Franklin County including a locally rare Baird's Sandpiper at Hell's Kitchen, Northfield on the 1st. It was a fine, crisp juvenile and courteous enough to stick around until the 3rd furnishing only my second county Baird's Sandpiper within the last ten years. My first Baird's was also a juvenile, found by Eric Huston on the Connecticut River on September 1st, 2017 and viewed from Barton Cove campground. Good shorebird conditions are not easy to find in Franklin County and we often have to be content with brief or distant views as was the case with 4 Semi-palmated Plovers at Caldwell Road sod fields, Northfield on the 2nd. The latter site also saw a Pectoral Sandpiper on August 29th with another, or perhaps the same bird at Hell's Kitchen on the 30th. Least Sandpipers have featured constantly at Hell's Kitchen (up to 23) and less frequently at Caldwell Road sod fields (up to 17) and Turner's Falls Airfield (2 - 5). An early Wilson's Snipe was noted on at Hell's Kitchen on three dates between the 3rd and 9th and on Sep 10th a calling American Golden Plover flew down the Connecticut River at Turner's Falls, the latter being a scarce, perhaps less than annual migrant in northern Franklin County.

Noteworthy waterfowl in the first ten days of the month included a lingering drake Gadwall at Turner's Falls with 2 -3 Green-winged Teal at Barton Cove and Hell's Kitchen, and a super group of six Blue-winged Teal at Hell's Kitchen on the 9th and 10th. Throughout the period 4 - 6 Pied-billed Grebes could be found lurking around a weed-choked Barton Cove. 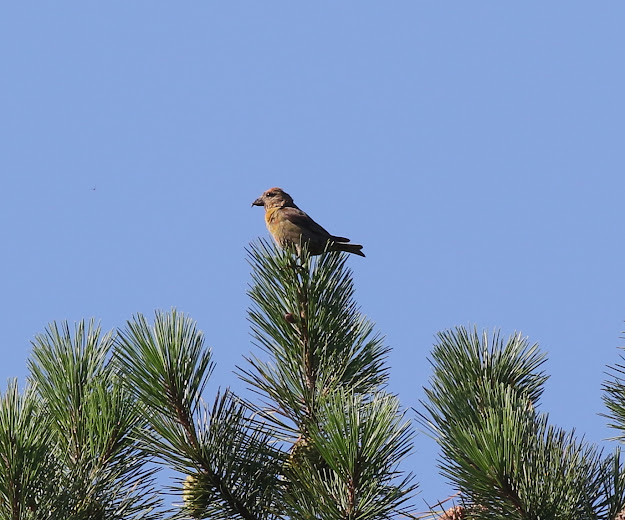 Red Crossbills and Red-breasted Nuthatches continue to feature in numbers with Hell's Kitchen, Northfield and the Montague Sand Plains being among the easier places to find them. Most of the crossbills have been identified as Type 10, but Tim Spahr managed to winkle out Types 2, 3, 10 and possibly 1 from single concentration of 21 birds in the Montague Plains on Sep 4th! The presence of streaked juveniles in the flocks also raises the possibility of local breeding. Still at the Montague Sand Plains, impressive numbers of Pine Warblers (35+) have been present with the flocks containing up to five Prairie Warblers during Sep 6th - 8th. Other passerines of interest included a Palm Warbler at River Road Cemetery, Northfield on Sep 10th and a decent showing of Yellow-bellied Flycatchers after the first at Hell's Kitchen on August 30th with several more there and along North Cross Road, Gill through to Sept 9th. 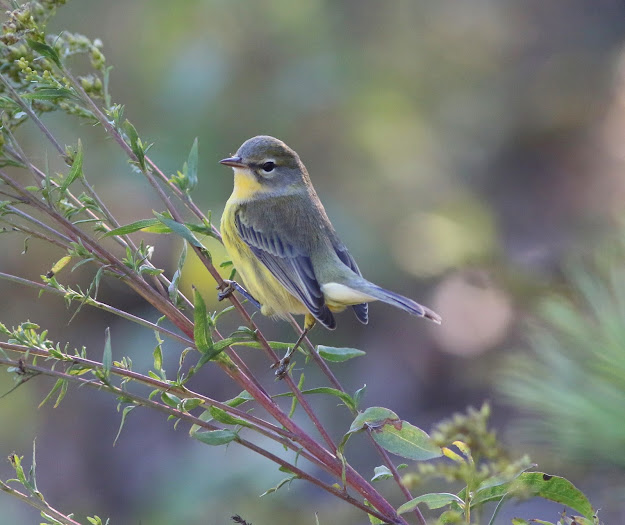 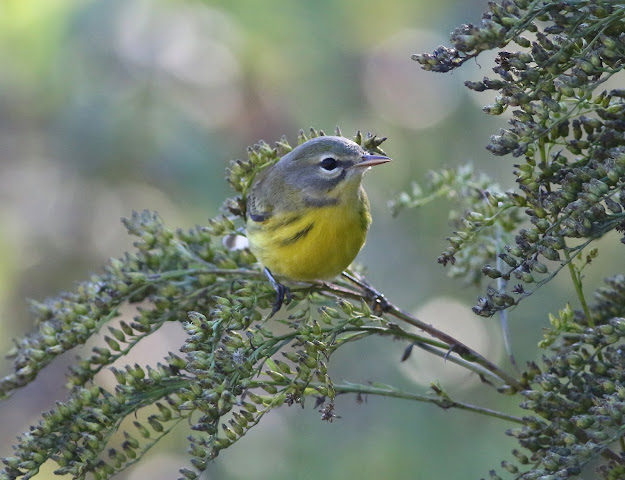 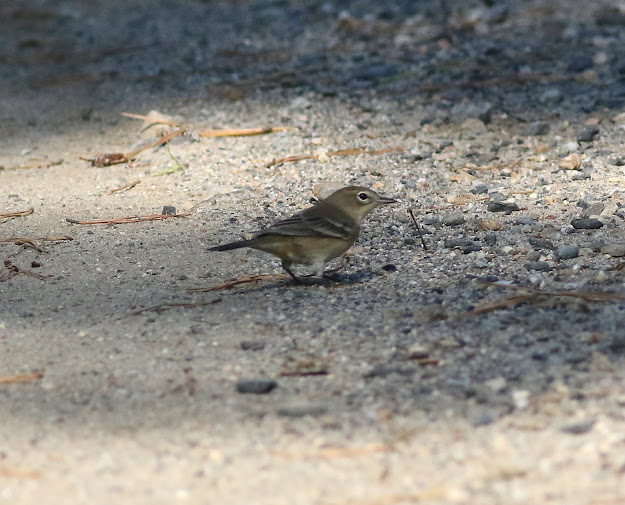