Fresh back from a fabulous tour to Israel to find western Massachusetts edging slowly towards spring. Widespread arrivals of Eastern Phoebes and Tree Swallows seemed to have taken place, and in particular phoebes appear to be present around most properties in Gill and up to 150 Tree Swallows can be seen hawking over Barton Cove on most days. Less usual was an early-ish Osprey heading north over North Cross Road, Gill on the 26th and a Fox Sparrow singing from there on the same morning.

Fish Crows again appear to be increasing in Turner's Falls (Unity Park, Avenue A and the Rod and Gun club) and downtown Greenfield (Pierce Street) with up to three together at all the mentioned locations. 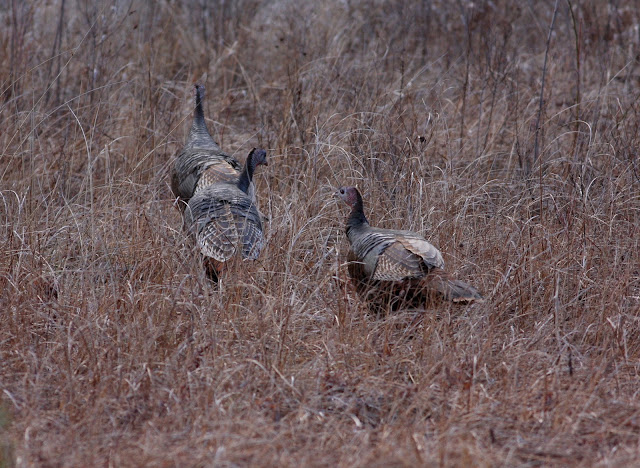 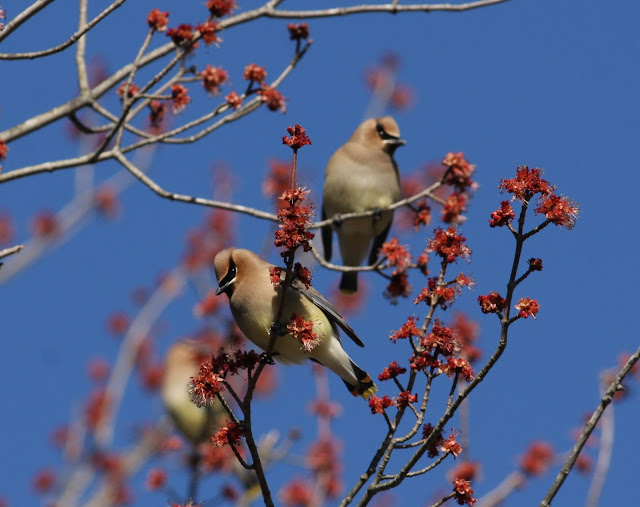 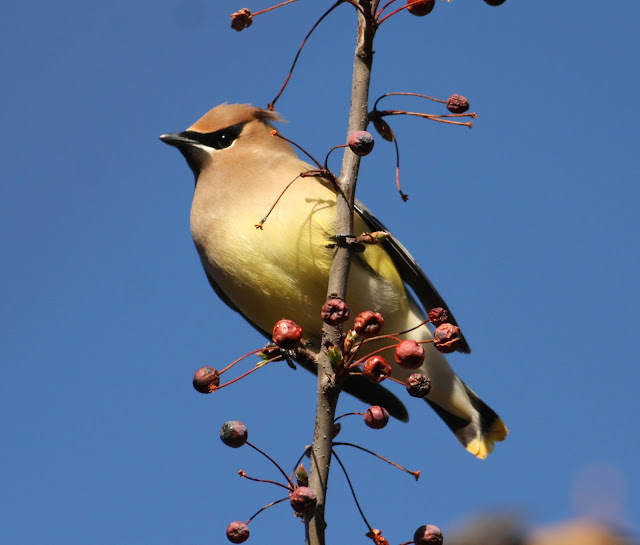 A sizable flock of Cedar Waxwings has also been roaming around the Unity Park area of Turner's Falls with up 100 birds present.  In the fields and meadows around Gill, very much in keeping with this time of year, small parties of American Robins throughout the area probably totaling around 500 birds - not huge numbers but nice to see all the same. Among them just one 'sooty-mantled' bird (nitrides) so far but perhaps more will pass through in the first week of April. Northern Flickers are already widespread and the first Yellow-bellied Sapsucker was 'wrapping' off North Cross Road on the 29th, a day which also saw the first American Kestrel of the season at Upinngil Farm. Another highlight was a male Ruffed Grouse perched in a Hemlock stand off North Cross Road on the 30th.

Barton Cove has been relatively quiet this week with just 10 Ring-necked Ducks over the 26th - 27th, and up to two drake Buffleheads and a female Common Goldeneye throughout, a pair Wood Ducks at the Rod and Gun club on the 27th. 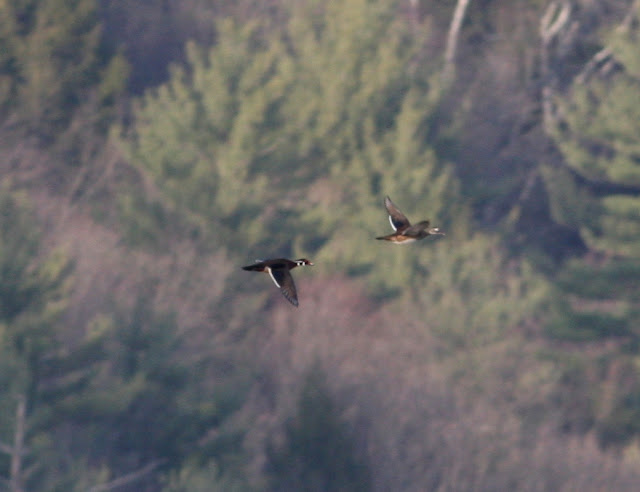 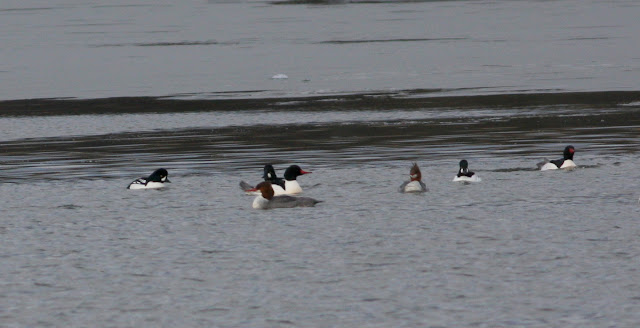 The opening week of March might best be described as 'steady', at least from the Gill/Turner's Falls perspective. It was very much a picture of gradual increases in waterfowl numbers and, respectively, dwindling numbers of large gulls. On the plus side, the attractive pair of Barrow's Goldeneyes remained at the Turner's Falls Rod and Gun club throughout the period along with up to four drake Bufflehead that consorted between there and Barton Cove. Good numbers of displaying Common Mergansers were present throughout. Numbers of Ring-necked Ducks peaked around the 4th/5th with up 23 at Barton Cove and a further 13 at the power canal - most were males.

Just as the large gulls appeared to be dispersing, a surprise Glaucous Gull showed at Barton Cove on the 7th and two Lesser Black-backed Gulls (first-cycle and second-cycle) brought more interest on the 8th. In fact, on the evening of the 8th, Ring-billed Gull numbers had swollen to 250 birds so there was clearly an arrival of fresh birds there. Many of the Ring-billeds were calling from the ice, as were the Herring Gulls.

In the fields around Gill, well lots of Red-winged Blackbirds and Common Grackles to be found there and this morning (the 9th) I thought I heard a 'snatch' of Eastern Phoebe song but couldn't quite clinch it. That was on North Cross Road where a calling Barred Owl and a Winter Wren were rather easier to confirm. It's currently very spring-like with temperatures expected to reach 70 deg F this afternoon...pretty crazy for early-mid March! 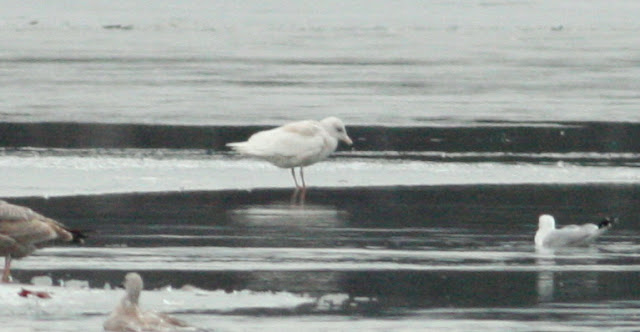 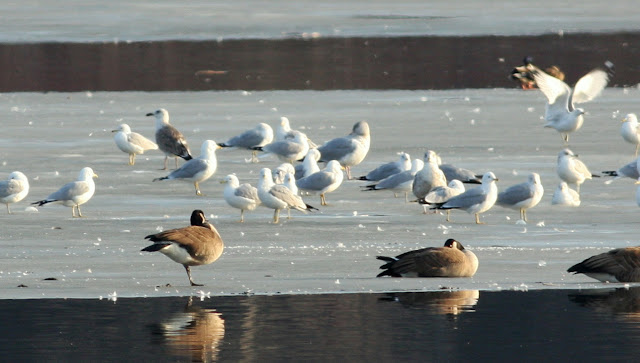 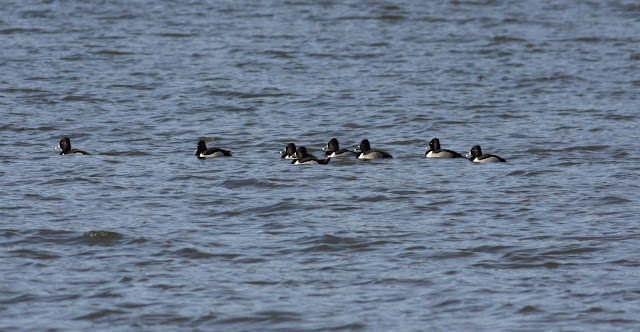 Yesterday we experienced an extra-ordinary day on Outer Cape Cod. Scott Surner, Brian Kane and I left the Pioneer Valley early. Our goal was to see the Yellow-billed Loon found at Race Point, Provincetown by Steve Arena about a week prior. We found the subject bird without too much trouble and then settled down to enjoy some of the best loon viewing that we've ever seen in North America. Conservative estimates of 150-200 Red-throated, 60-70 Common and 3 Pacific Loons and the Yellow-billed made for an unprecedented four loon day......not too shabby and well worth the three-mile round trip trudging through the soft sand of Race Point beach.

The spectacle was not taken for granted, not by any any means. Loon watching can be difficult at times with individuals tending to disappear for extended periods, especially when diving frequently. Race Point beach was all the more impressive as the rarities (Yellow-billed and Pacific Loons) remained on view for extended periods providing a living 'loon workshop' for anyone who might be interested in improving their knowledge of this fantastic group of birds in basic plumage.


Although it was a tough day out from Western Massachusetts, all three of us agreed that it was one of the best field experiences that we'd had in the state in recent years. On the walk back to the parking lot, I couldn't help but think about how fortunate Massachusetts is to be blessed with some remarkably good birders - 'chapeau' to Steve Arena for his excellent find and for alerting us to the excellent loon viewing currently available at Race Point. 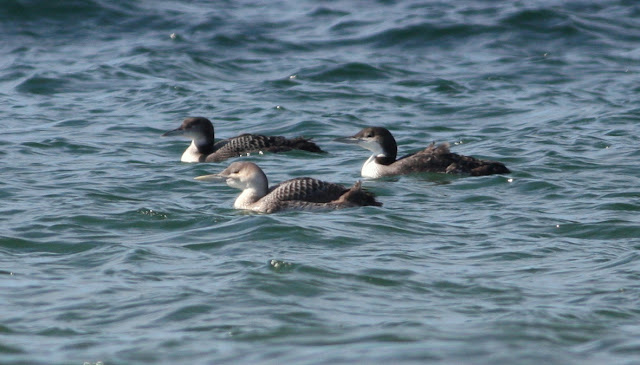 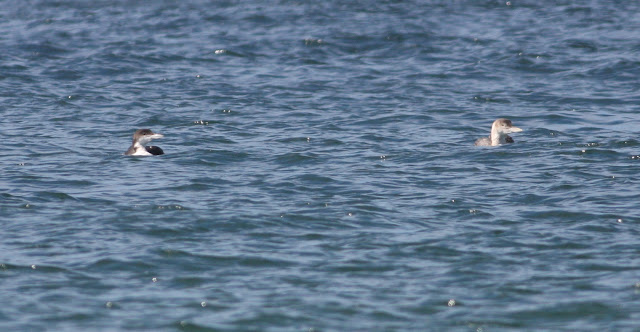 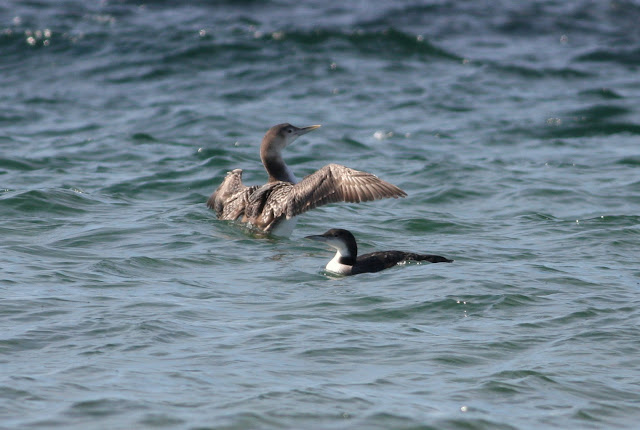 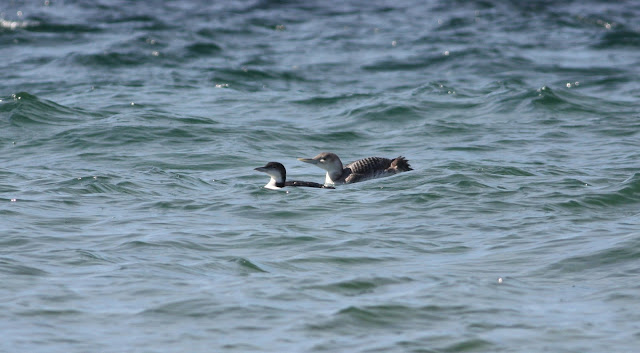 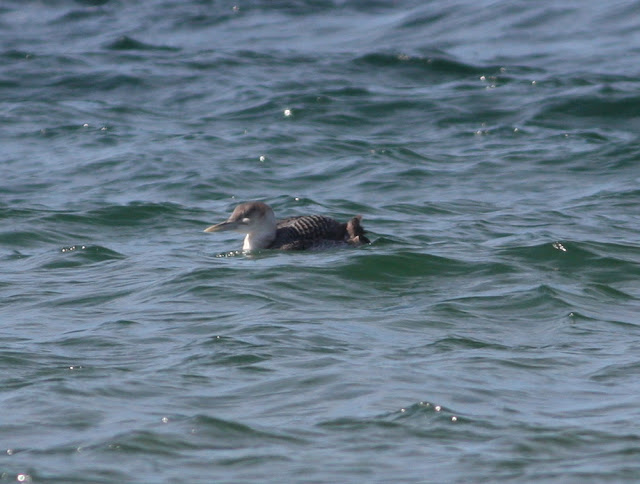 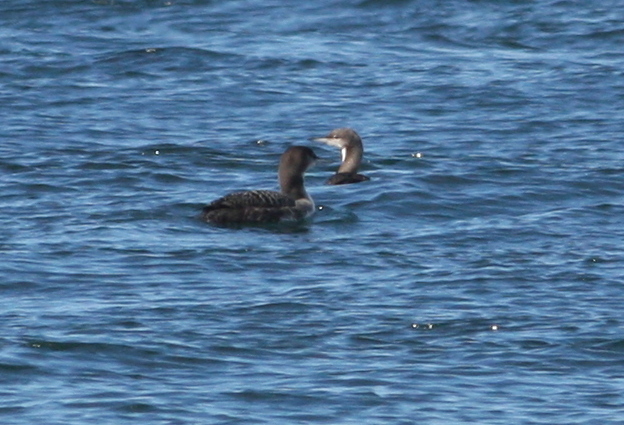 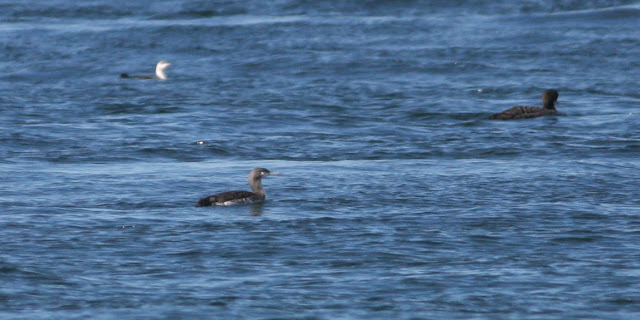 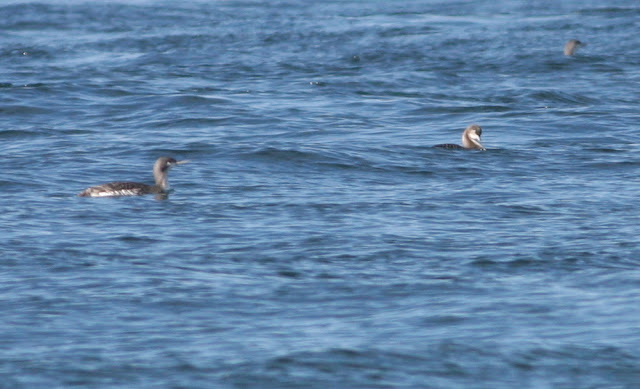 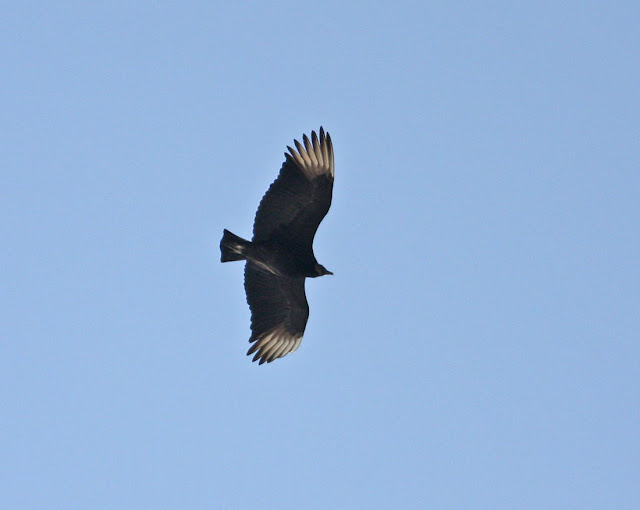 The last week of February has seen widespread arrivals of Turkey Vultures, Red-winged Blackbirds and Common Grackles to the greater area of Gill/Turner's Falls/Greenfield, all of them clear indicators that spring is on the way. Subtler indications included a 'gentle push' of northbound Lesser black-backed and Kumlien's Iceland Gulls and ever increasing waterfowl diversity that included a party of eight American Wigeon on the 25th, and a flock of Ring-necked Ducks increasing from three on the 24th to nine on March 1st. Perhaps most impressive was a drake Barrow's Goldeneye initially located by Scott Surner on the 27th and still present at the Rod n' Gun club on March 1st. But in many ways, all of these birds would be more or less expected in our area in late February. 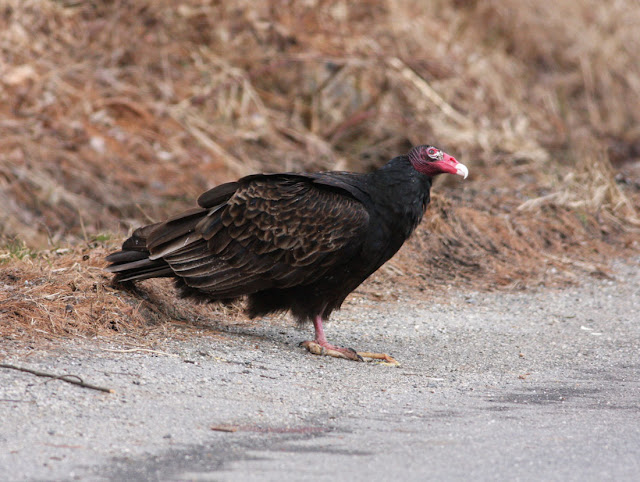 The presence of Black Vultures in Gill was much less expected however, beginning with a distant bird seen with Brian Kane from Riverview Drive soaring out over Barton Cove campground on the 27th. The following day, two Black Vultures circled over the same area and, somewhat surprisingly, they began displaying (!!) albeit briefly, before departing WNW right over my head! My overall sense is that the status of Black Vulture is in changing in Franklin County and I think we can look forward to more sightings and possible breeding in future. Here's my personal tally of Black Vulture sightings in Franklin County since I began regular observations in the area back in 2005; 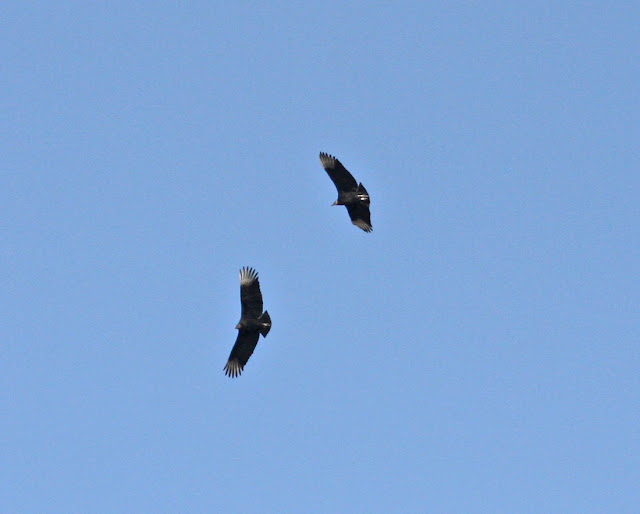 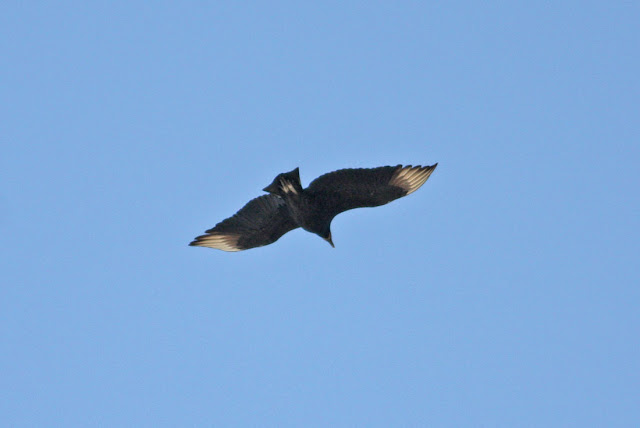 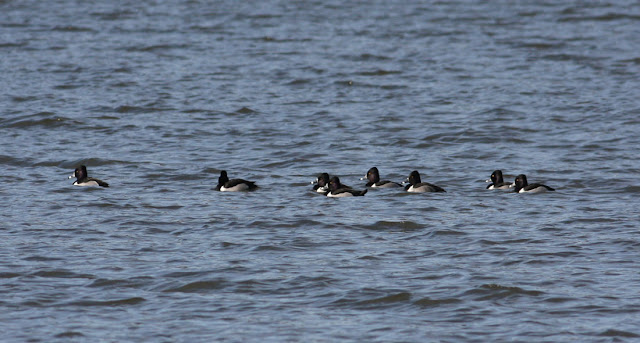 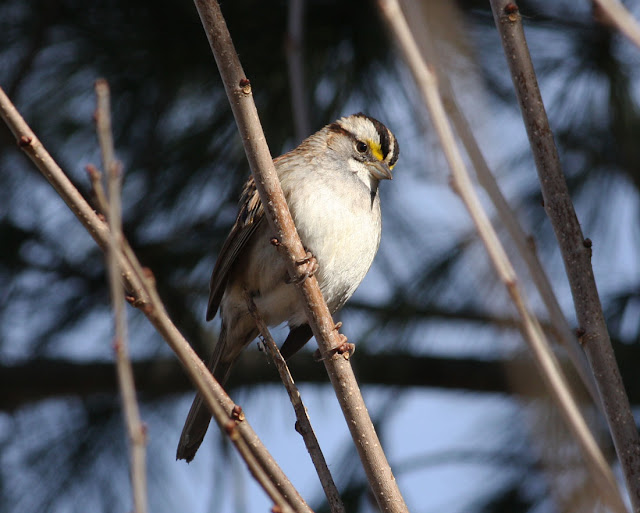 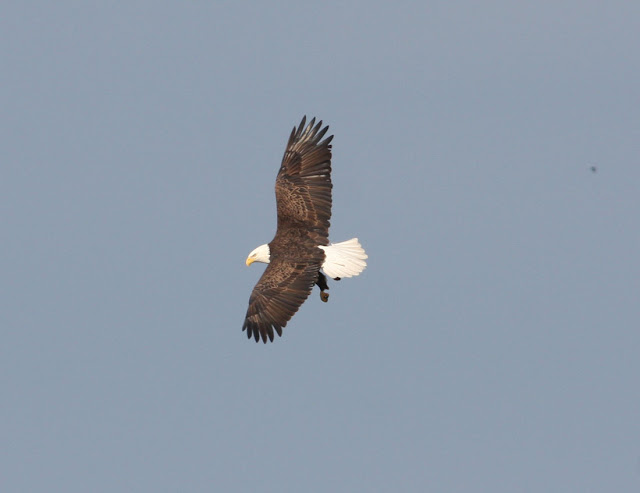 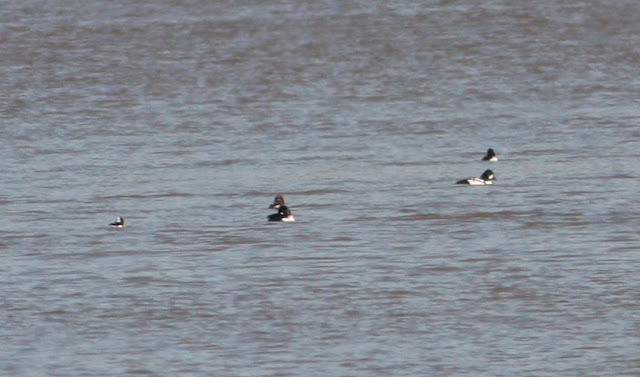 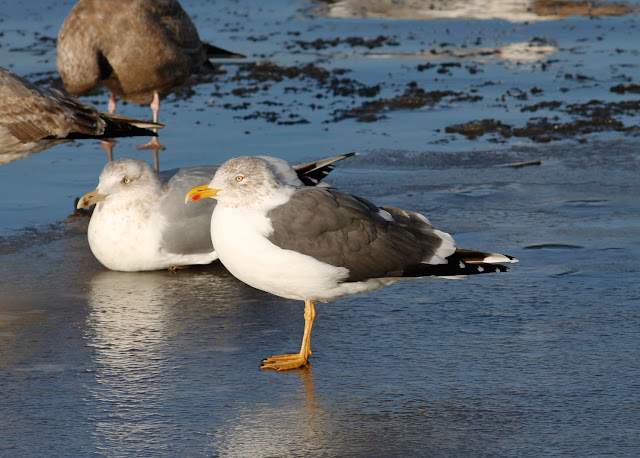 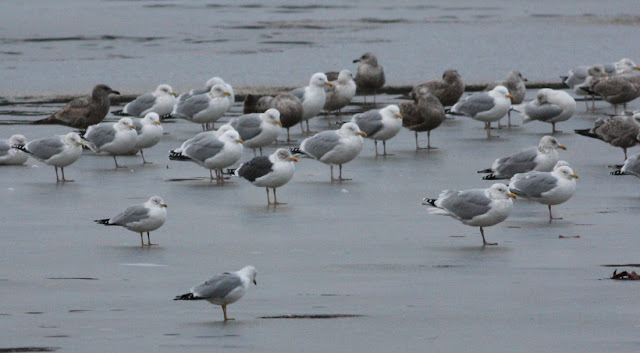 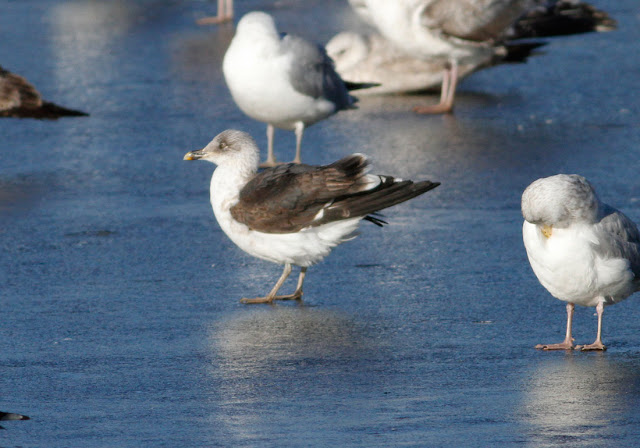 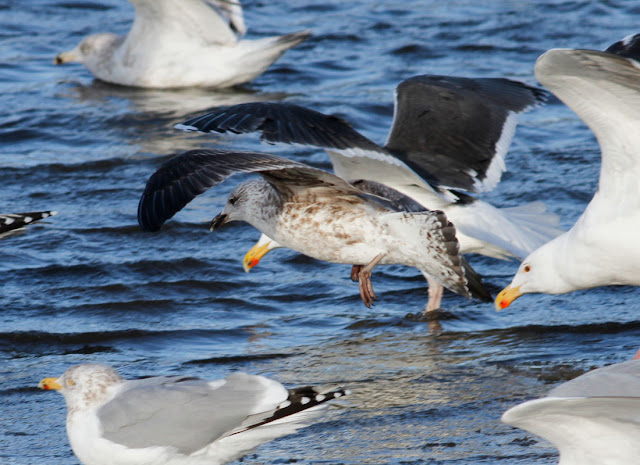 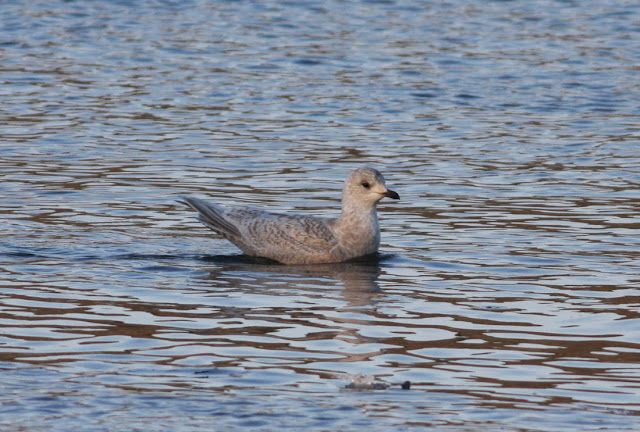