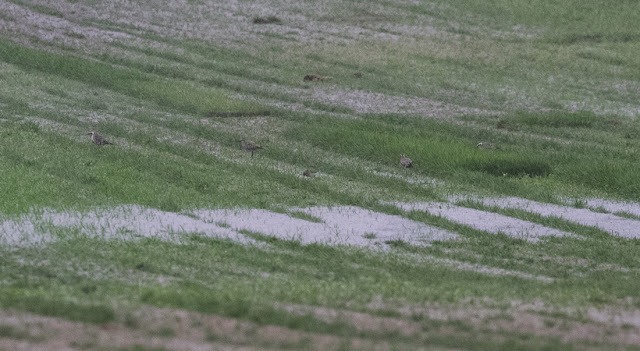 Yet more storm activity overnight bringing heavy to torrential rain throughout the morning, plus one or two power outages in our area. Again I checked a few likely spots for shorebirds and found the Northfield sod farms to be the most productive with 4 American Golden Plovers and a Pectoral Sandpiper in mid-morning, along with at least a dozen Killdeer. The same site had been bereft of shorebirds the previous day so I assumed that all were fresh birds arriving on the current turbulent weather system. Turner's Falls airfield had a Killdeer and two shorebirds in flight that I'm pretty sure were Pectoral Sandpipers but couldn't quite confirm it in the height of the deluge. At Barton Cove, last weekend's Pied-billed Grebe had been joined by a second bird.
Posted by James P. Smith at 2:55 PM No comments:

This morning I had a quick spin around a few sites in Northfield on the west side of the Connecticut River. It was warm and muggy with winds in the southern quarter. Generally, it was rather quiet but highlighted by calling Dickcissel that flew low to the east over Caldwell Road fields. Later I wrestled with an interesting calling 'warbler' that turned out to be a Northern Waterthrush and not the hoped-for Connecticut Warbler! 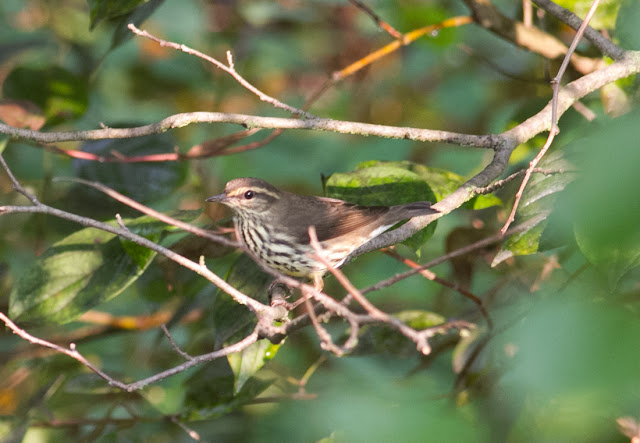 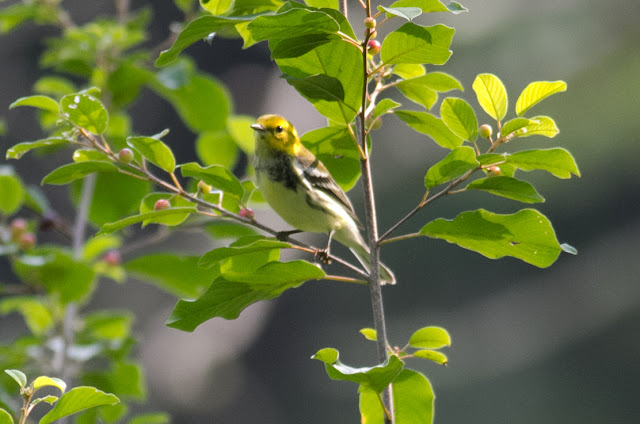 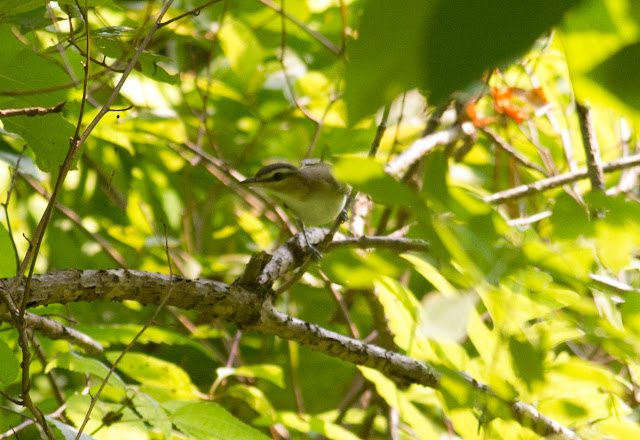 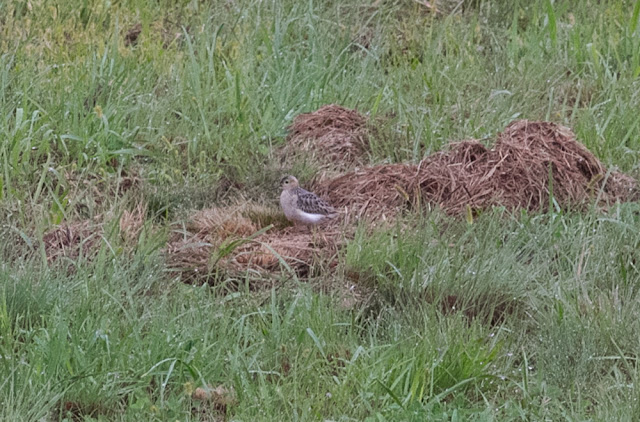 Steady to heavy rain for much of the day produced an excellent fall-out of shorebirds this afternoon. First stop was Four Star Farm in Northfield where an adult American Golden Plover joined the local Killdeers on the sod fields and closer inspection winkled out 3-5 Semi-palmated Plovers and at least 5 Least Sandpipers. With the deluge still pouring I moved onto Turner's Falls airfield and rolled up to find shorebirds all over the runway! Most were Killdeer (20+) but good numbers of Semi-palmated Plovers (8+) were also present along with 4 Least and 2 Semi-palmated Sandpipers - a rare gathering indeed for Turner's airfield. Despite the heavy rain I lingered for a while sensing that there was more to come. Within a few minutes I locked onto a beautiful Buff-breasted Sandpiper, a species I'd been wanting to find locally for some years. Conditions were awful for photography but I was pleased to come away with a handful of record shots. 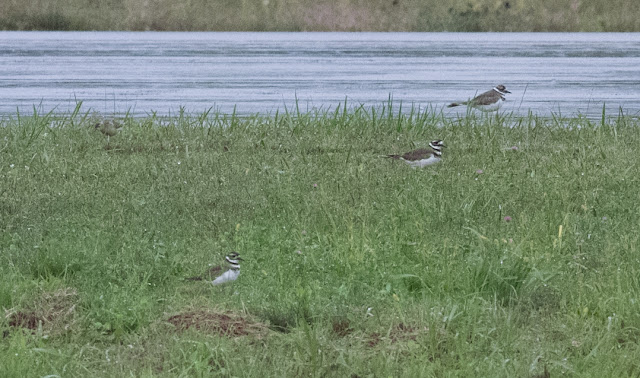 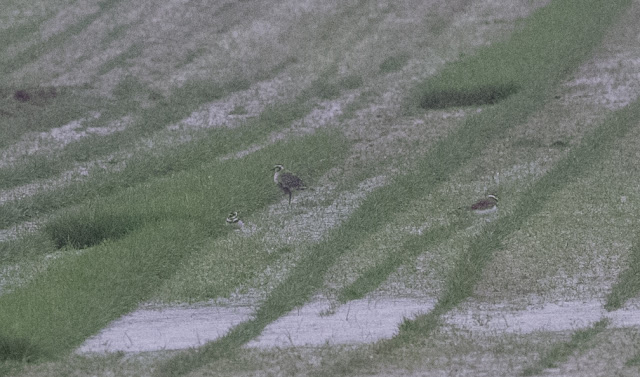 September opened with a welcome temperature drop and brisk north-westerlies. The Caspian Terns at Barton Cove on August 31st certainly piqued my interest and I was back on September 1st finding a group of distant teal that I felt reasonably sure were Blue-winged. Fortunately this hunch was more or less confirmed in late afternoon with a male Blue-winged Teal seen in flight from Barton Cove campground. Elsewhere, I tried a hilltop west of Greenfield for raptors and had 3 Black Vultures dispersing northwards from roost with a about 15 Turkey Vultures. A handful of Broad-winged Hawks and single Red-shouldered Hawk were also seen but, generally, it felt early for raptor migration. 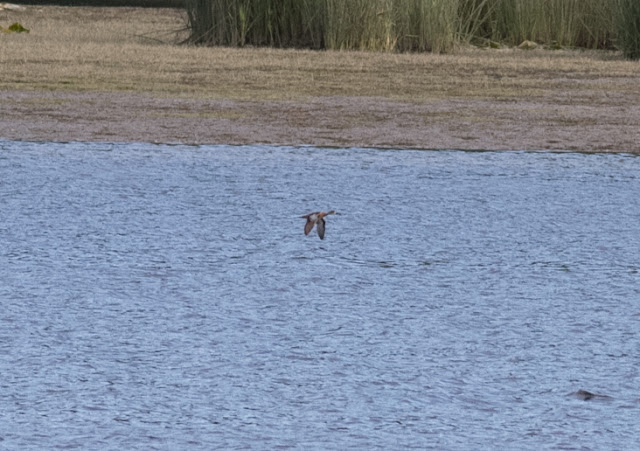 Later in the day the focus shifted to shorebirds when Eric Huston contacted me with a probable Baird's Sandpiper being seen at distance from Barton Cove campground. Given Eric's conservative birding style I instinctively knew that it was a bird that I should try to see and eventually met up with him at the campground. Sure enough, although distant, we watched a beautiful juvenile Baird's Sandpiper foraging on a mud bar with a few Least and Semi-palmated Sandpipers. Rare shorebirds are not easy to catch up with in Franklin County and this was a county first for both of us - 'chapeau' to Eric for his excellent find.

The following morning (Sep 2nd) was shrouded in fog but Brian Kane tried his chances for the Baird's and located it just as the fog cleared. Just as I joined him, not only did we see the Baird's but Brian rather expertly found a White-rumped Sandpiper sharing the mud bar with several Killdeer, 5 Semi-palmated Plovers, up to a dozen smaller peeps mostly Least Sandpipers, and at least one Lesser Yellowlegs, plus 2 or 3 Greater Yellowlegs - not a bad haul for Gill in early September!
Posted by James P. Smith at 10:01 AM No comments: 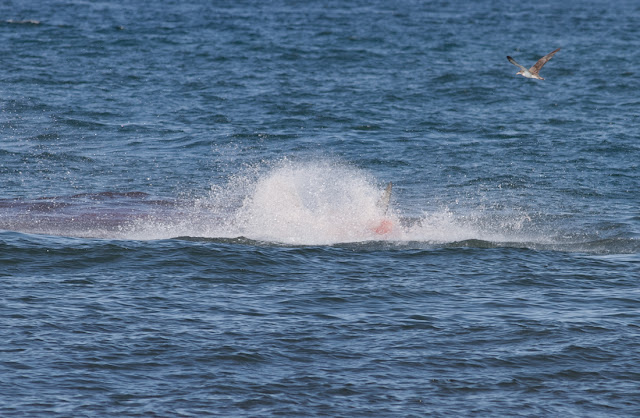 We had a fairly close encounter with a shark on our family holiday on the Outer Cape last week.  Head of the Meadow Beach, on Cape Cod National Sea Shore was our favored beach for swimming and Matan loved the surf there spending 3 - 5 hours in the water each day.  On August 25th Matan, who was taking a brief rest from the water and drying off, leaped up yelling "shark, shark - everyone get out of the water". A huge bloody commotion was taking place right in front of us, easily less than 75 meters from shore, and the 20-30 people in the surf at the time!!

In just a few seconds it was all over and an eerie calm fell over the beach as everyone stood on the shore hoping for another sighting but it wasn't to be. On a personal level, I was surprised that no shark fins were observed before the attack and equally surprised at how quickly a huge pool of blood appeared in the water. Moreover, I was blown away at just how quickly our nine year old identified exactly what was going on in front of him and his concern to get everyone out of the water.

I'm not sure that the shark or the prey item can be identified with certainty but we think the shark was very likely a Great White Shark and the prey, a Gray Seal. We'd been visiting the beach every day during our break and shark sightings were surprisingly frequent, usually taking place in late afternoon. After each sighting, the life guards raised a red flag indicating unsafe swimming conditions which would remain in place for at least an hour.

As for Matan, well he never went back into the water for the rest of the vacation, pretty remarkable for a kid who'd been spending 3 - 5 hours in the surf everyday up to that point. This encounter definitely spooked him! 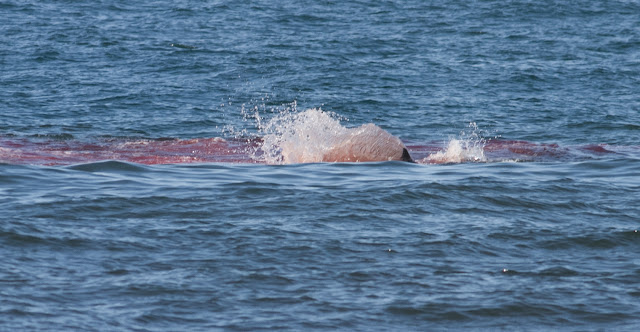 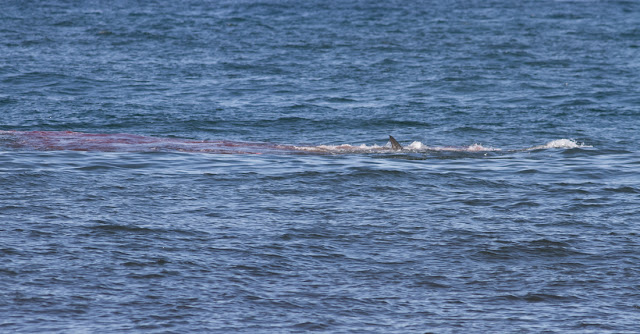 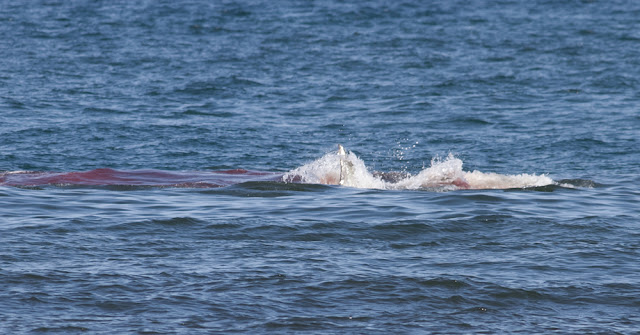 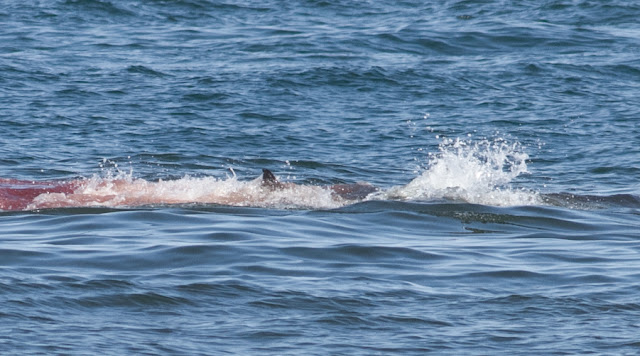 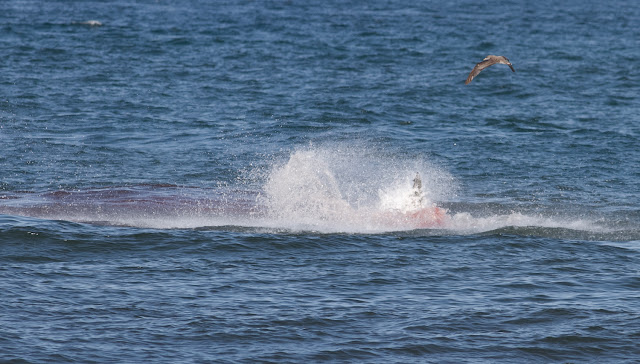 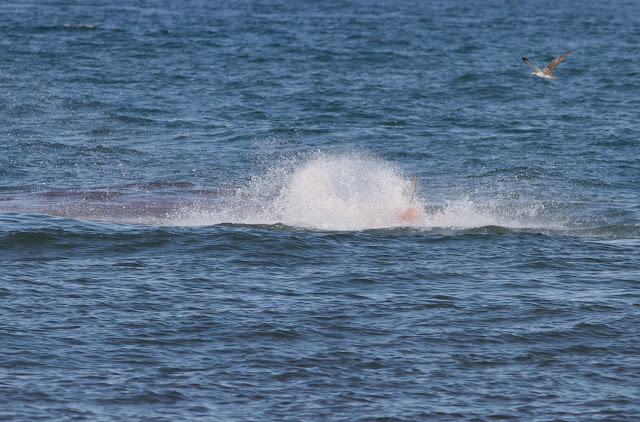 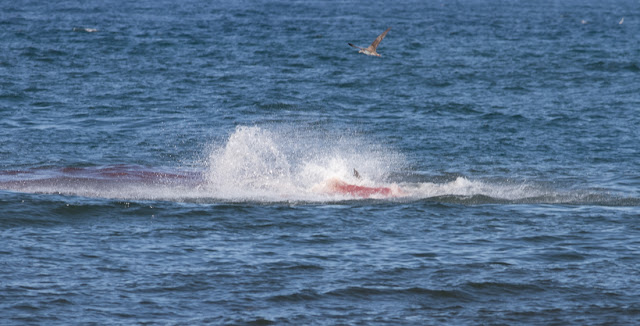 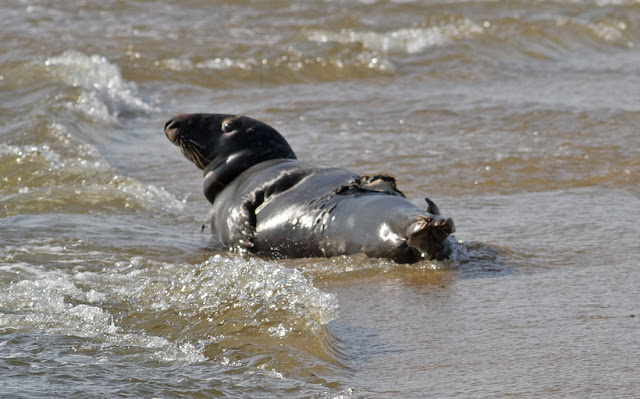 Gray Seal - hauled up on the beach just after the attack. Very clearly badly injured but probably not
the seal involved in the encounter that we observed. 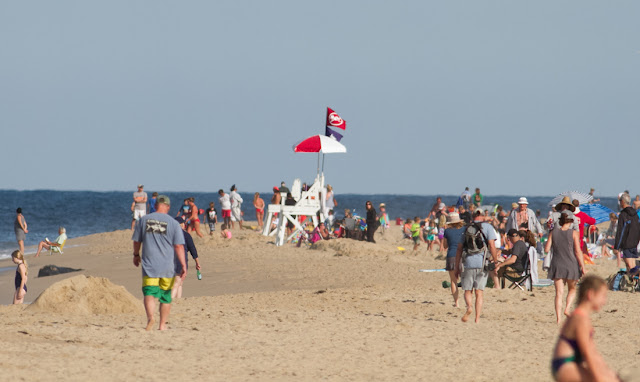 The mandatory 'no swimming' red flag goes up after the observation. 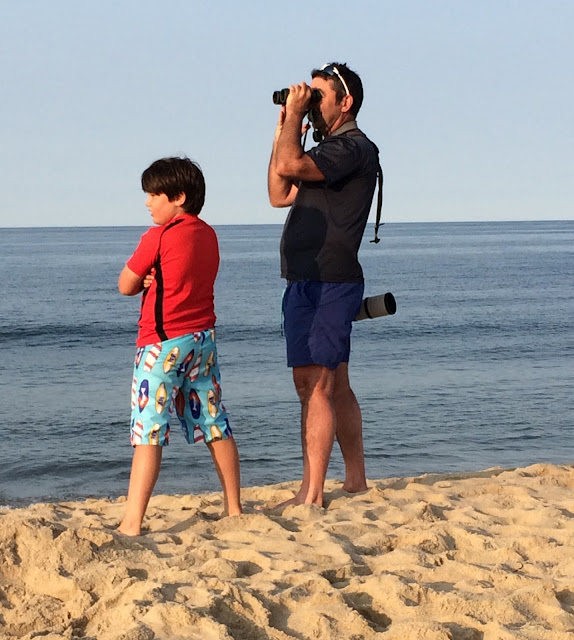 Scanning for sharks the following morning over a flat calm Atlantic Ocean.
Posted by James P. Smith at 12:02 PM No comments: