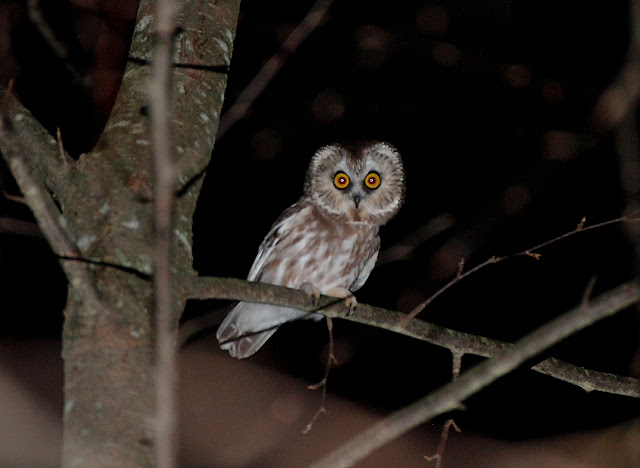 I've long been intrigued by the presence of Northern Saw-whet Owls in the Pioneer Valley. This perky little owl seems to be only rarely detected as a breeder, migrant and winterer in our area. Yet, with a bit of effort and commitment, it's not too difficult to find saw-whets in the woods of Franklin County. In particular, this autumn seems to be a bumper year for migrant saw-whets and the banding stations in Eastern Massachusetts have recorded some exceptional numbers over the last month or so.
So with this in mind, I headed out to my local area determined to find a few saw-whets of my own. On the first evening (Nov 7th), together with Eric Huston, I checked some sites near my home on the west side of the Connecticut River in Northfield. We had a fabulous time finding saw-whets in all of the three plots that we checked. The birds responded with squeals, whines and 'squew' calls as well as more subtle hissing and bill-clicking, and included a response within 30 seconds at one spot! Views were limited to 'flight-only' but I had sightings at two out of three plots including two birds at one of these. At our final plot, we again heard squeals and whines in response to imitated calls but our hopes of views were dashed when a Barred Owl suddenly appeared in the spotlight. Barred Owls will certainly chase saw-whets given the chance and not surprisingly the next saw-whet call we heard was way off in the distance. So in summary, we heard/saw somewhere between four and six saw-whets from three plots on our first evening in Northfield - not too shabby!

With seemingly optimal conditions continuing into early evening on Nov 8th, I decided (last minute) to try some sites in and around Gill Center, this time being joined by Laura Gaudette. We hit four different spots and found saw-whets squealing and whining in all four, with the 'squew' calls heard less frequently, but still heard very well. Two sites had multiple saw-whets calling back and forth and we think we may have had as many as three birds at our last site. Not to be outdone, Barred Owls turned up at two plots including one very vocal bird that scuppered our chances for views at the first plot. So, all in all, another brilliantly successful evening with saw-whets in all four plots. Sadly, these birds really gave us the run-around when it came to actual views with the owls staying high in the hemlocks almost all of the time. However, in many respects the erratic behavior of these tiny owls is all part of the mystique and I know, for sure, that they can be seen well at times as this image from New Salem in 2009 shows. It was taken with simple Canon Powershot point n' shoot camera at close range. 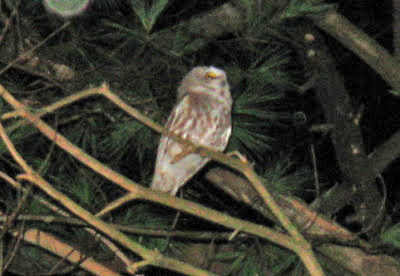 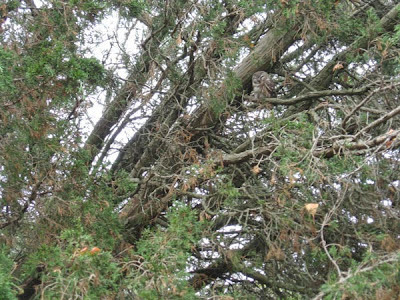 Northern Saw-whet Owl - Salisbury Beach, Essex Co., MA. October, 2010.
Day time roost of a migrant in Eastern Red Cedars.
I've yet to get this lucky with a day-time roost in Franklin County, but I am trying!