December - not too shabby at all! 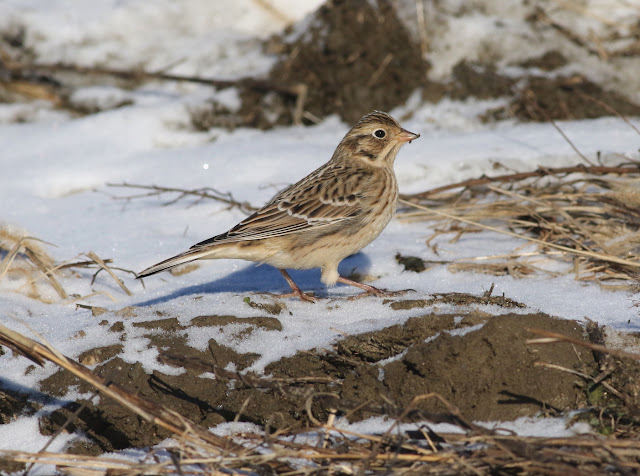 December, traditionally a month of minimal daylight, falling temperatures and usually lots of snow. Compared to October and November, my expectations for birding in December are generally pretty low, yet over the years the month has produced exciting birding in the Connecticut River Valley. Look no further that the near simultaneous appearance of two Sage Thrashers in 2020, one in Hampshire Co., MA and one in Cheshire Co., NH! 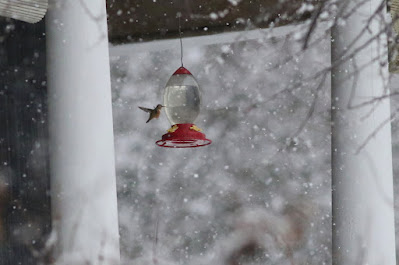 Rufous Hummingbird (fem/juv)- Millers Falls, Franklin Co., MA. December 16th, 2022.
As hardy as they come - Rufous Hummingbird in a blizzard!! First noted on Oct 7th by home homeowner
Bruce Kanash. Banded and identified on Nov 14th by Anthony Hill. Present and thriving at Bruce's home through to about Dec 21st.

In addition to the long staying Rufous Hummingbird in Millers Falls, the month brought another major rarity in the form of a Smith's Longspur to the Hadley floodplain. Kudos must go to Scott Surner who found this bird lingering at the side of a busy thoroughfare in the Hadley Honey Pot on December 12th. To the joy of many, myself included, the longspur was courteous enough to stick around for weeks allowing hundreds of birders to share in Scott's discovery and to find itself added to the local Christmas Bird Count! At the time of writing (Dec 31st) it was still present favoring the same general area along Cemetery Road in the Honey Pot. Scott's find furnishes the fifth state record for Massachusetts and the first ever in the Pioneer Valley though there is an historical report by Harvey Allen from the nearby East Meadows April 1st, 1993. Though this record wasn't accepted by the MARC, it's always intrigued me largely because of the compelling elements of the description with comments such as "tame", "observed as close as ten feet" and "un-streaked buffy underparts indicating a female". But, birding in the modern era demands a high standard of documentation and in this respect the Hadley bird was a gift being absurdly tame, calling frequently and usually returning to the same feeding spot day after day, even when it was flushed. 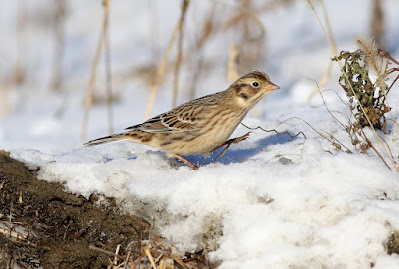 I've had quite a lot of luck with Smith's Longspurs over the years having seen them in the breeding areas on the Denali Highway, Alaska multiple times. But, the Hadley bird was only my third away from Alaska after chasing singles at Jones State Beach, Long Island, NYS in Feb 2007 (2nd state record) and Tuthill Road, Maricopa Co., AZ in Jan 2012 (2nd state record). To have one so close to home and showing so well was an absolute dream. Thank you Scott!

Other passerines of note this month but closer to home included a lingering Hermit Thrush and a late Eastern Towhee on North Cross Road, Gill on Dec 23rd and a small handful of Red Crossbills (Type 12) over Gill and along Green River Road, Colrain towards the end of the month. 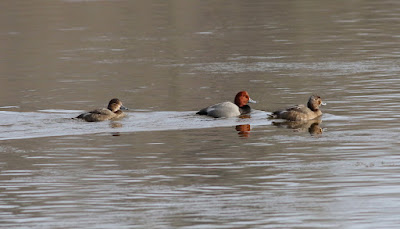 Redheads - Turner's Falls, Franklin Co., MA. December 25th, 2022.
Loafing with the Mallards at Unity Park on Christmas morning, a lovely surprise though they didn't stick around for long. 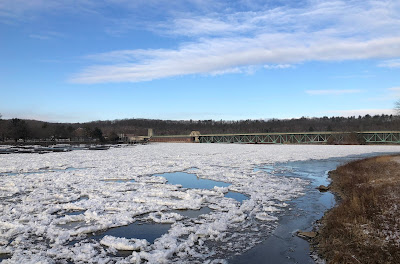 Frigid temperatures and major ice flows over the Christmas period brought some unexpected waterfowl to Turner's Falls with a female Northern Pintail at the power canal on Christmas Eve and three Redheads including a fine drake at Unity Park on Christmas morning. The Redheads didn't linger but the pintail stayed until Dec 31st and was briefly joined by a second fem/juv on the 28th. A lone juvenile Snow Goose at Barton Cove on Dec 26th was the most unusual goose of the period but also fairly typical in its random appearance. 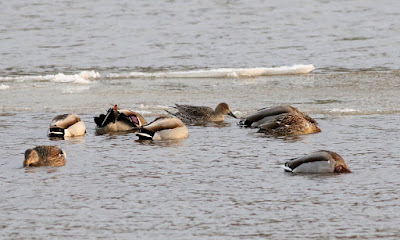 Northern Pintail (fem/juv) - Turner's Falls, Franklin Co., MA. December 24th, 2022.
Another unusual duck showing up with Mallards, this time at the power canal. This bird lingered to the
year's end and was joined by a second fem/juv on Dec 28th. 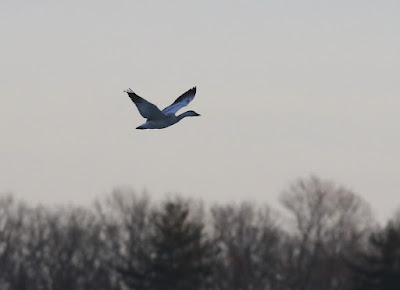 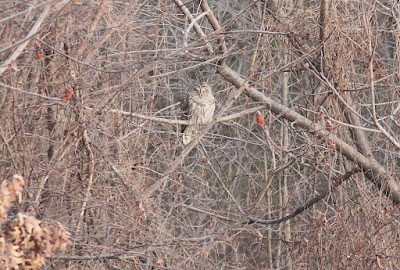 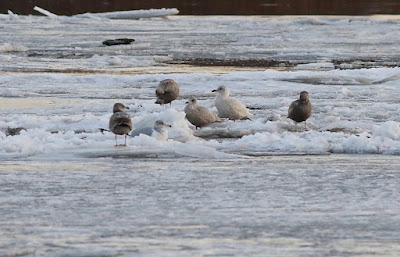 After a steady start, the numbers of large gulls began to build quite nicely towards the end of the month. With them came Iceland (Kumlien's) Gulls, initially two but then building up to five together at Barton Cove on Dec 28th with a new individual seen on the 29th so perhaps as many as six in the area by month's end. One or two Lesser Black-backed Gulls were present among the Herring Gulls too, though being immatures they were easily lost among the masses but I think at least two individuals were involved between Dec 22nd and 29th. 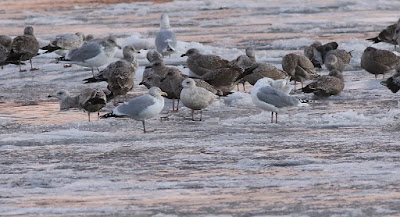 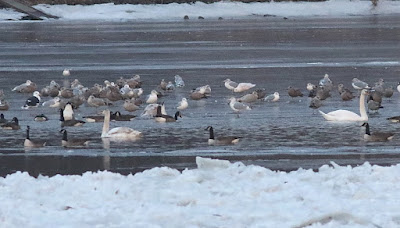 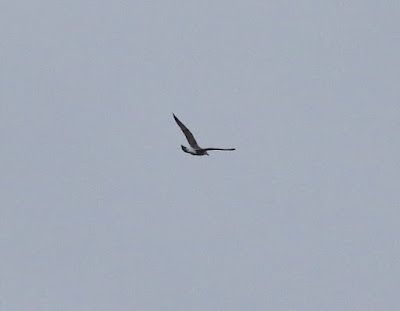 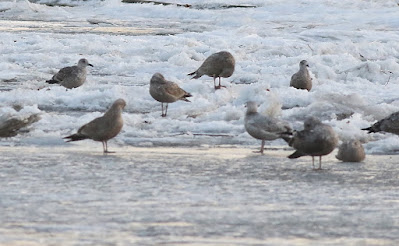 Lesser Black-backed Gull (first-cycle) - Turner's Falls, Franklin Co., MA. December 29th, 2022.
Upper left bird in this image, and probably different to the LBBG I noted on Dec 22nd.
Happy New Year and a bird-rich 2023 to all!