MA - White-winged Crossbills and other 'winter finches' this week 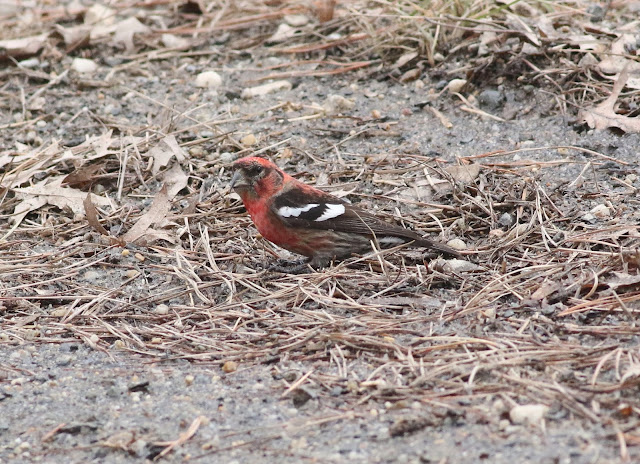 The White-winged Crossbills first noted on Feb 25th continued into the first week of March at the Montague Plains WMA . While it's possible there may have been some turnover, after spending a couple of hours each morning following crossbill flocks, I came away with the distinct impression that the numbers of both crossbill species were about the same as they were last week, roughly 70 Red Crossbills and 3 - 5 White-winged Crossbills. The latter included two males consorting together, a duo that I first noted back on Feb 25th, plus several single males with random flocks of Red Crossbills occasionally dropping down to the road for 'gritting'. Almost all the activity has been concentrated along Old Northfield Road in the southern portion of the WMA with crossbills occurring on both sides of Old Northfield Road and sometimes actually on the road itself. New (for me) in the plains this week were a single Common Redpoll and 3 Pine Siskins, the latter in song and particularly noteworthy since they haven't occurred on the same sort of scale locally as other wither finch species. 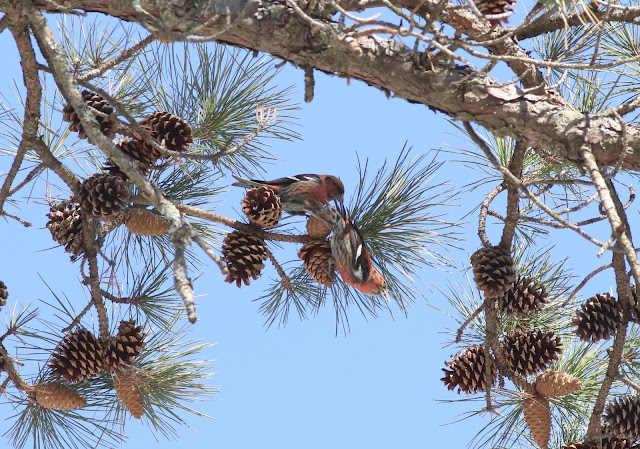 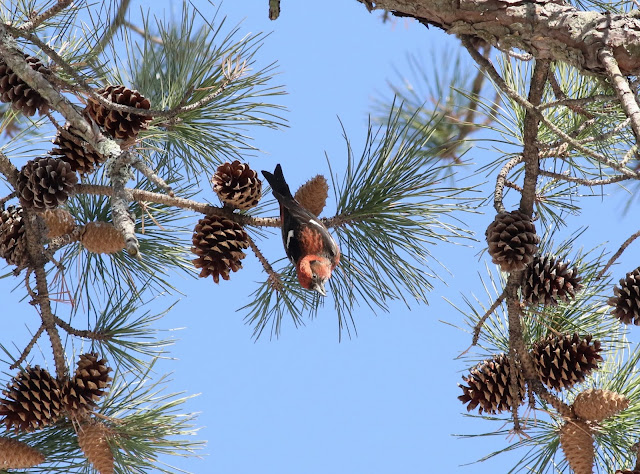 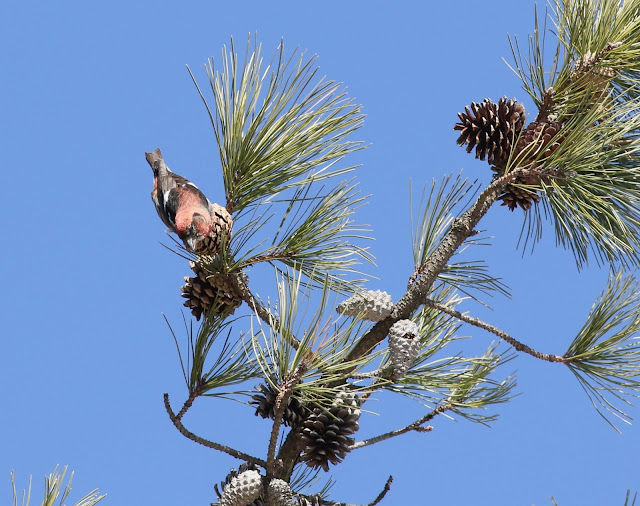 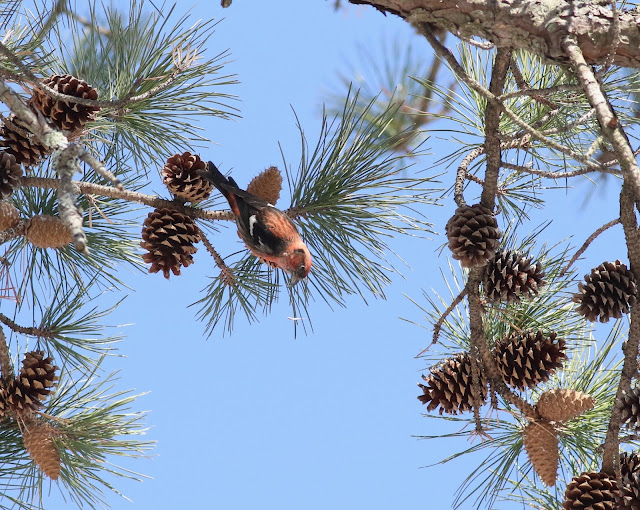 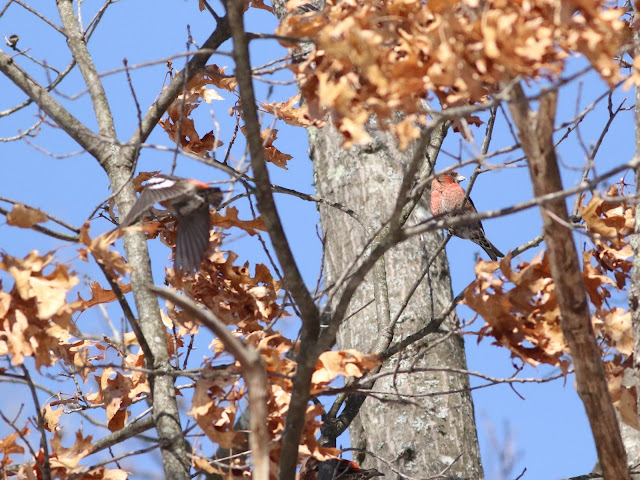 Looking at White-winged Crossbills, I don't mind admitting that I'm still smitten and wanted to make the most of them while they're here. In a couple of weeks they'll almost certainly be heading back to the boreal forests and long gone from the Montague Plains.  I'm hoping/expecting that at least some pairs of Red Crossbills will remain in the plains to breed but after hours of carefully watching them this week I've yet to see any actual breeding activity such as nest building. 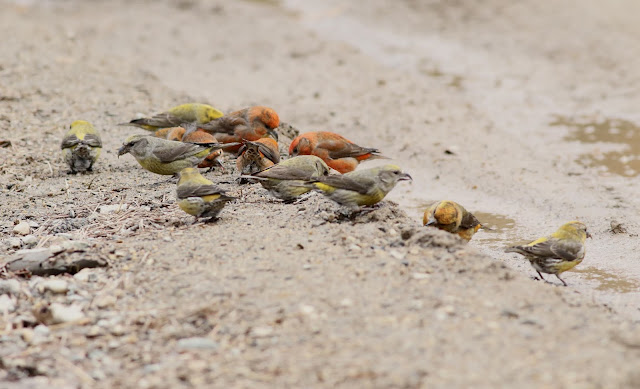 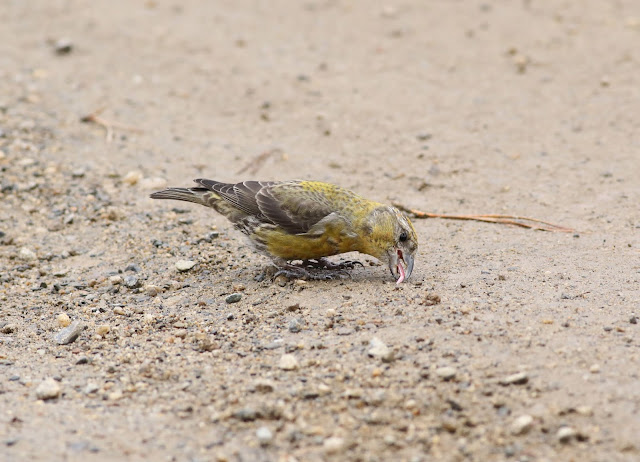 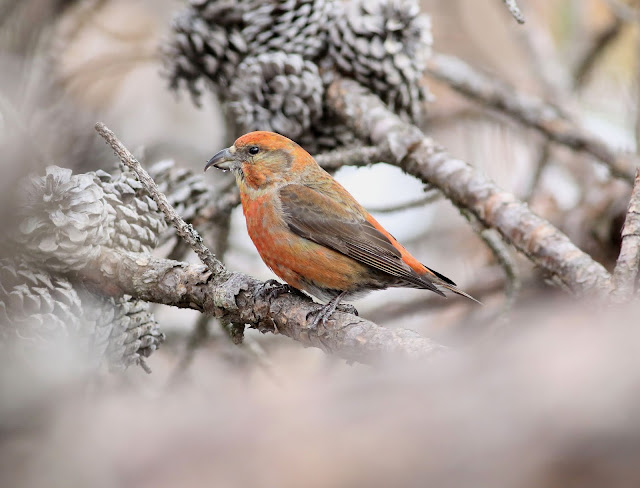 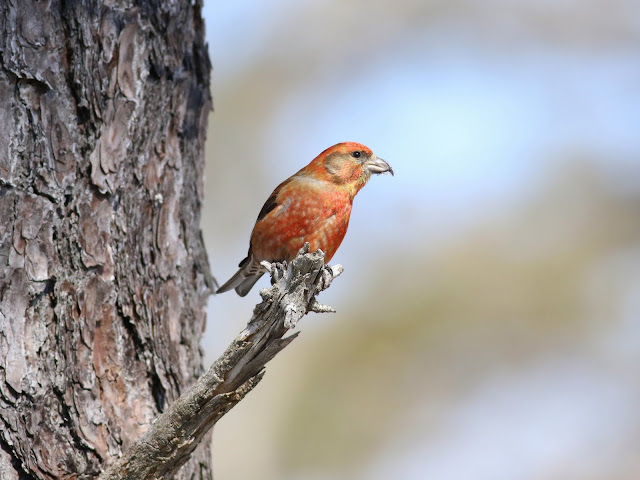 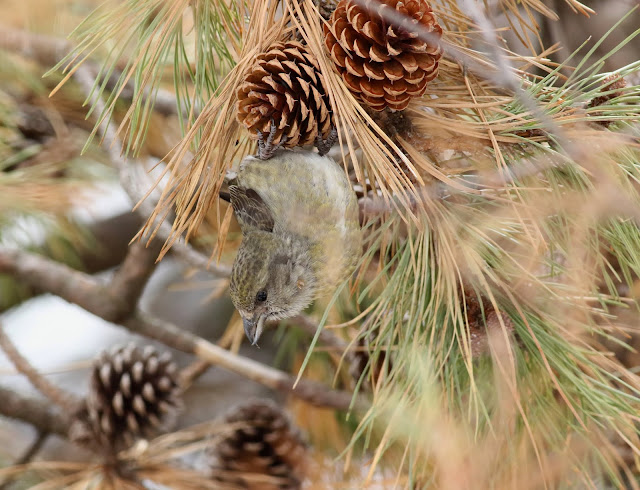 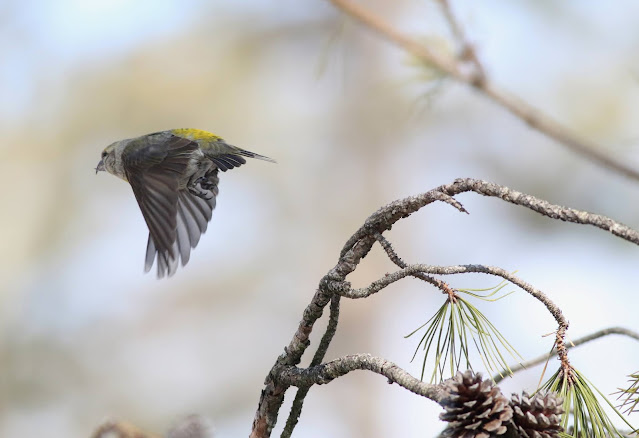 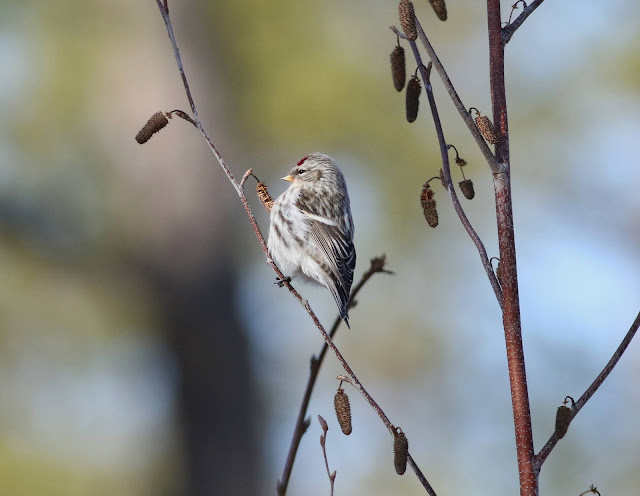 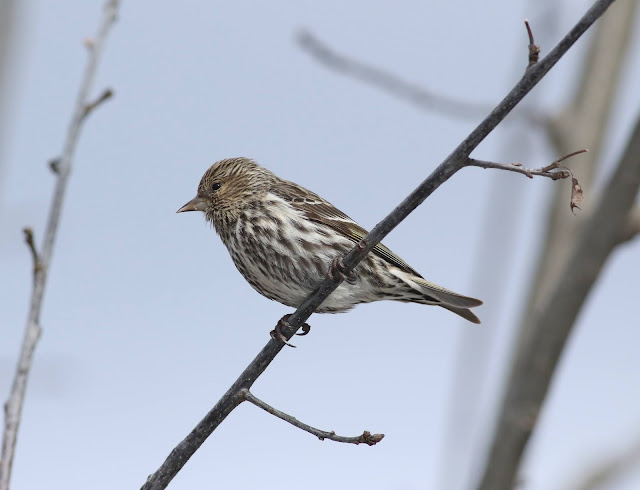 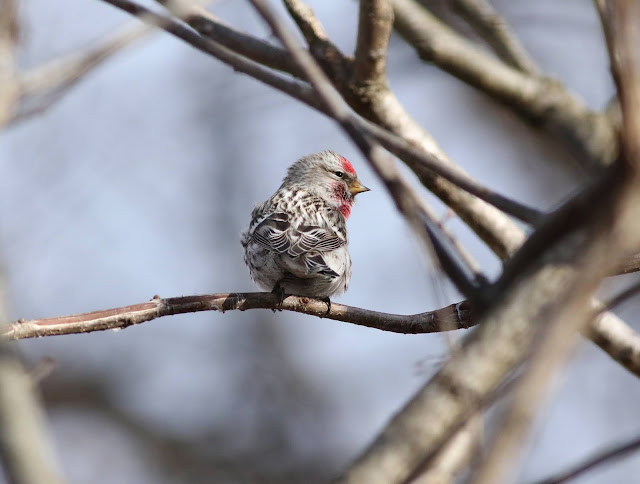 Common Redpoll (male) - Whately, Franklin Co., MA. March 5th, 2021.
The 'Whately Redpolls' surprised me this week both in terms of numbers (85) and the volume of song/calls coming from the thickets alongside the fields. 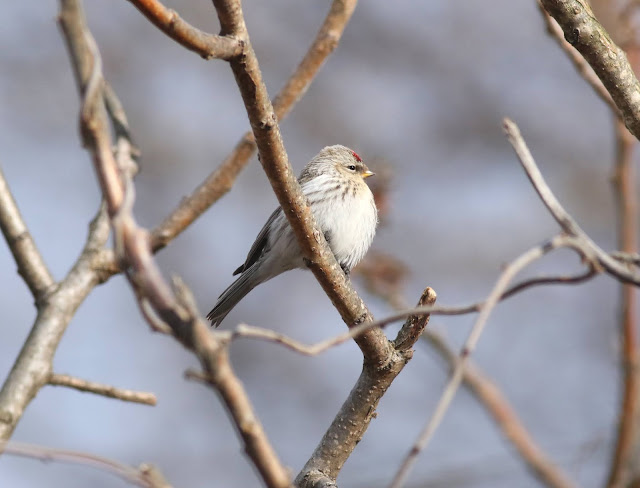 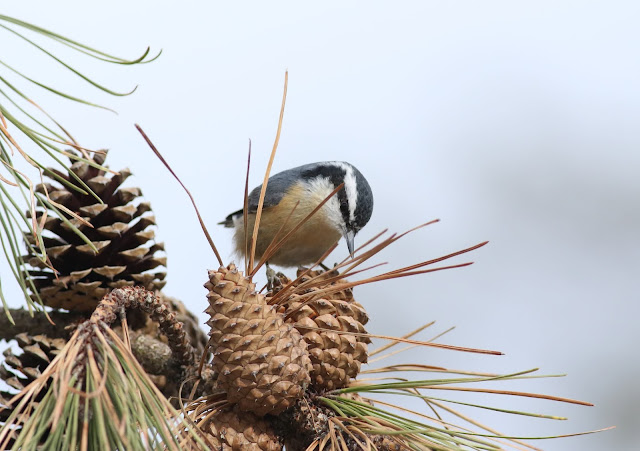 Migration Notes; small numbers of American Crows heading north through much of the day on the 3rd occurring in flocks of 5 - 8 birds over Montague Plains, Turner's Falls and Greenfield. Also the first 'hints' of Canada Geese moving north with 6 over Turner's Falls on the 3rd and 5 over Montague Plains on the 4th, both flocks of highflyers heading purposefully north. Two first-winter Iceland Gulls joined the small gull roost at Unity Park on March 3rd-6th with an adult Lesser Black-backed Gull (new) present on the 6th. Over 100 American Robins together along Meadow Road, Montague on March 5th, and Turkey Vultures over Sunderland on the 5th (Brian Kane) and Main Road, Gill and Turner's Falls (4) on the 6th. 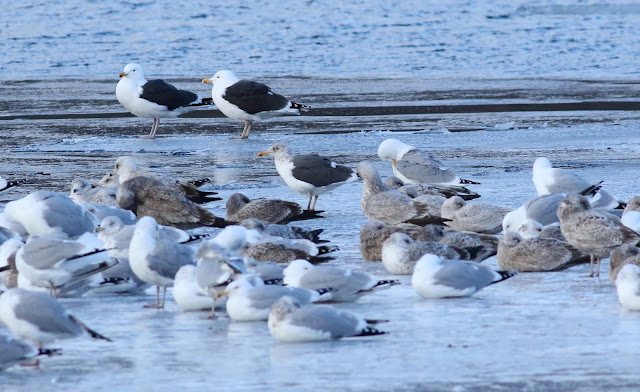 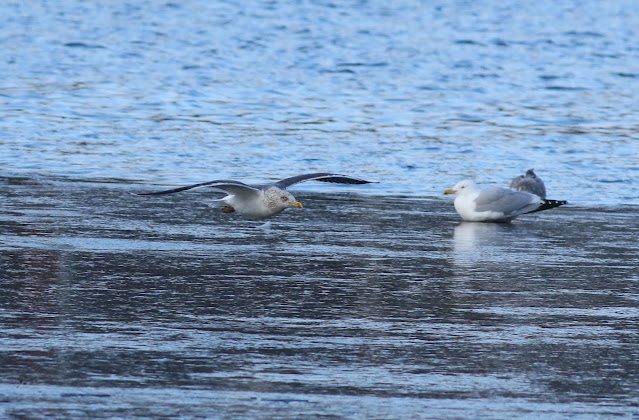