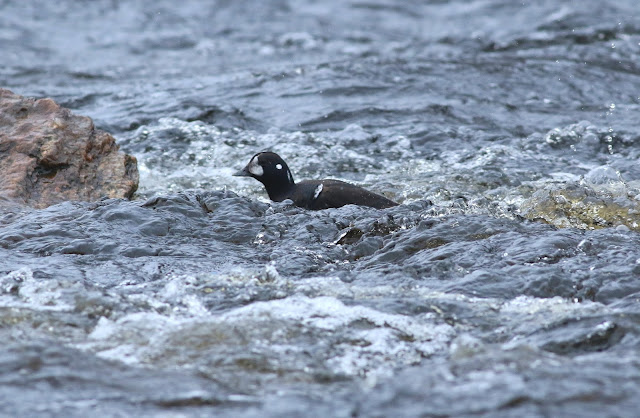 A brand new year and it seems that there's no slowing up in the general excellence of birding along the Connecticut River Valley. Late last night I read an intriguing report of a Harlequin Duck on the Millers River, a mere ten minutes from our home in Northfield and a spot that I knew well from my local bike rides. First and foremost, kudos and full credit goes to Anne Jemas who gave such a compelling description of the bird and (importantly) its behavior that I had little choice but to go and have a look for myself! It was a fabulous first-winter male, just as Anne described, and the only duck present on the river. Nor was it especially shy leaving me to simply enjoy it and the beautiful location it had chosen. Inland records of Harlequins are exceptional in Massachusetts and I'm not aware of any other reports for the Pioneer Valley. Congratulations to Anne for a truly spectacular find and for following it up with such an excellent description.

Moreover, on the short walk upriver I came across an unseasonable Eastern Phoebe, with the walk back producing two flyover White-winged Crossbills - not too shabby!

Postscript: in the afternoon I went back to the Millers River with Susannah who quickly found the Harlequin significantly further downstream than I'd seen it in the morning. In fact, it was visible from bike path bridge looking upstream. We later rounded off a fabulous day for diving ducks with a visit to the Turner's Falls power canal where the Common Goldeneye roost built up to about 60 birds and the  young male Barrow's Goldeneye flew in with one of the last groups to arrive. About eight Hooded Mergansers and a female Bufflehead were also present. 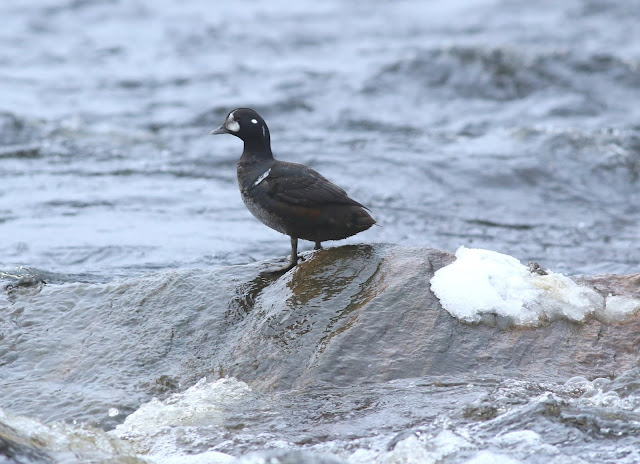 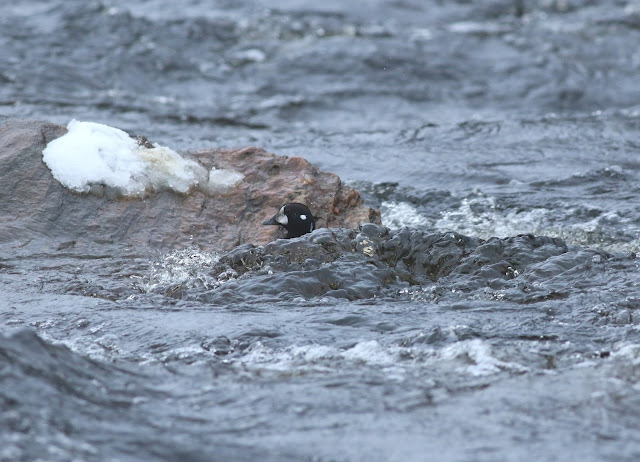 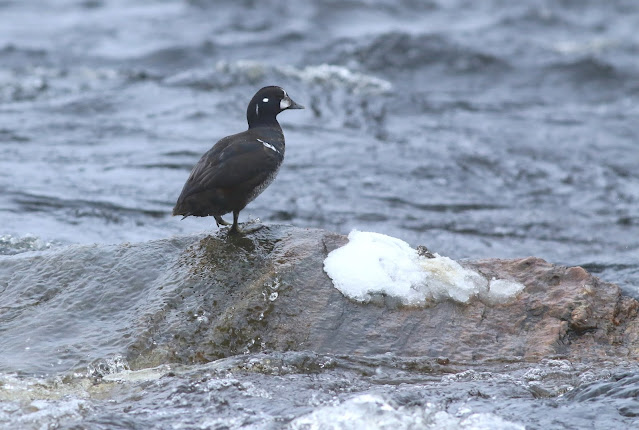 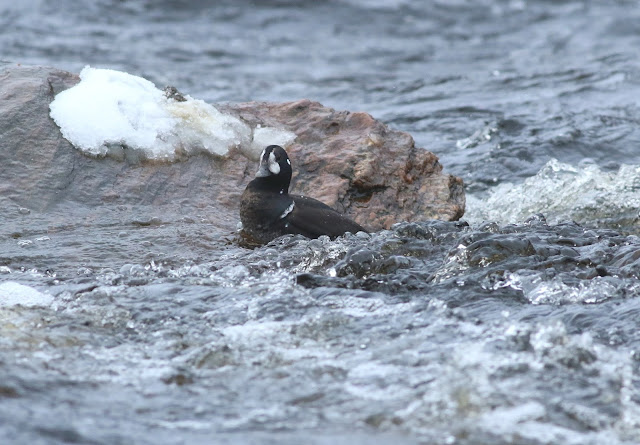 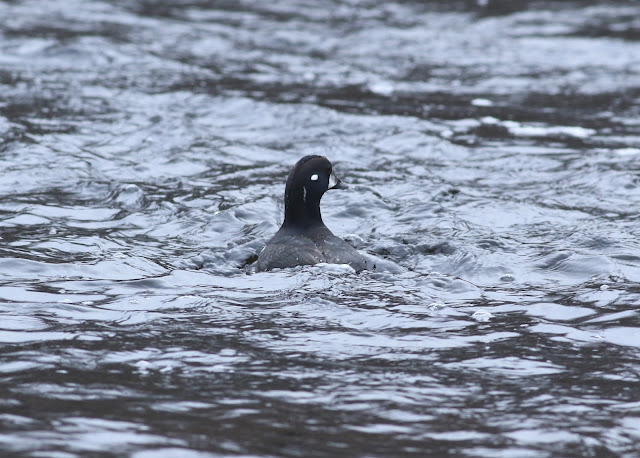 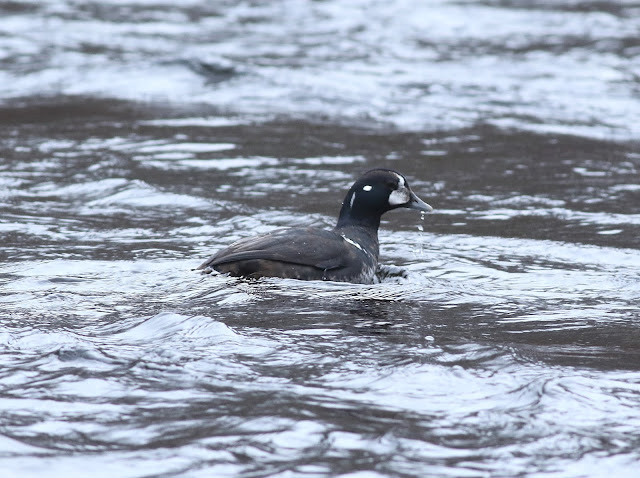 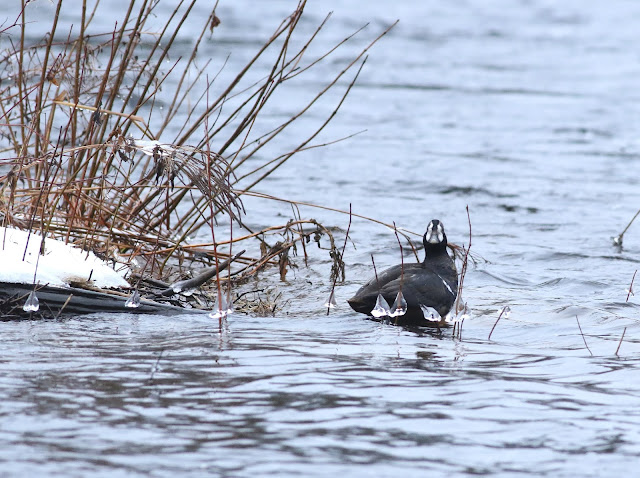 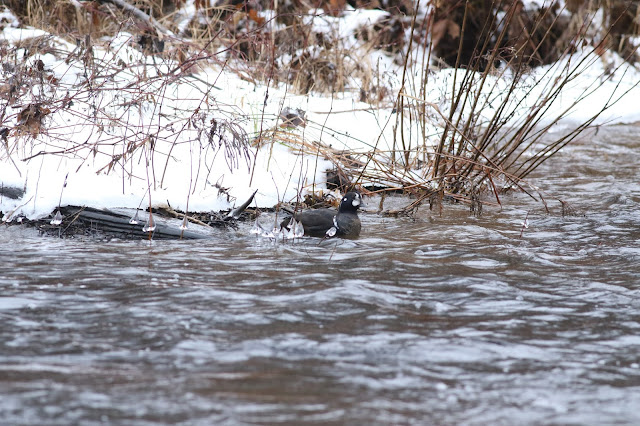 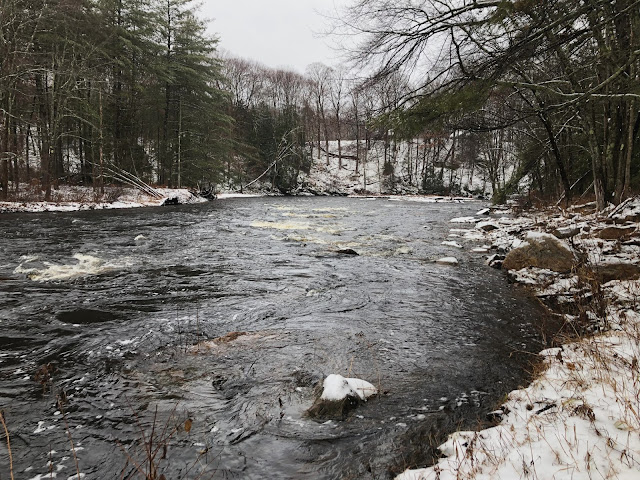 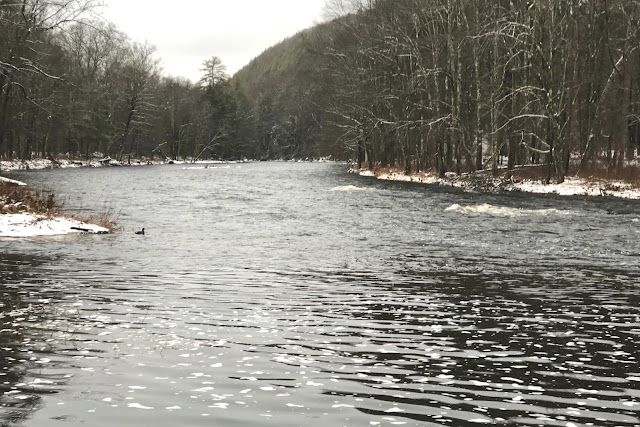 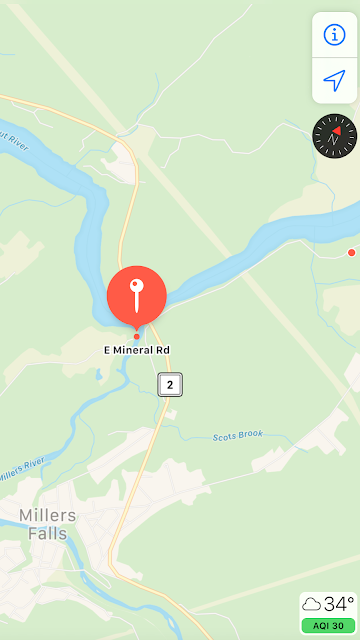 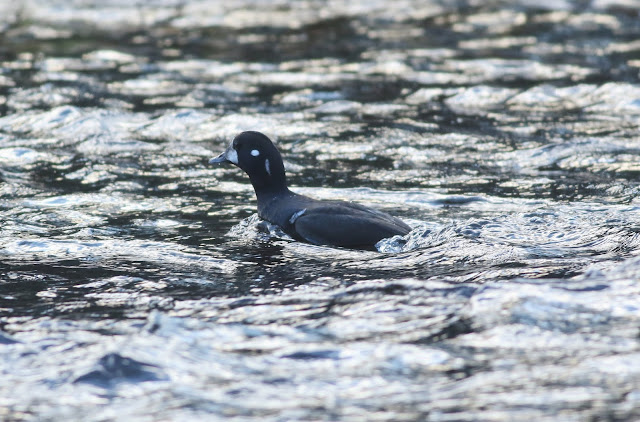 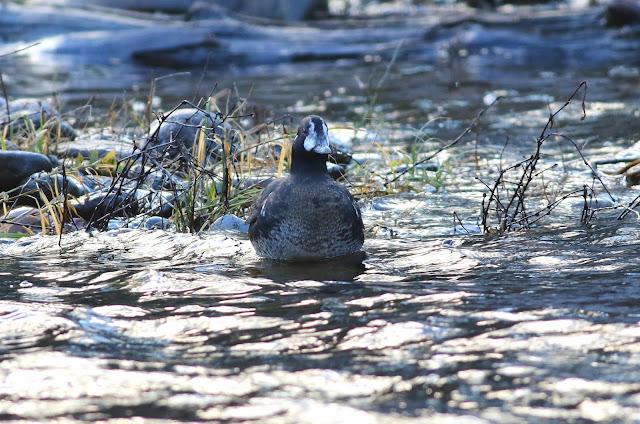 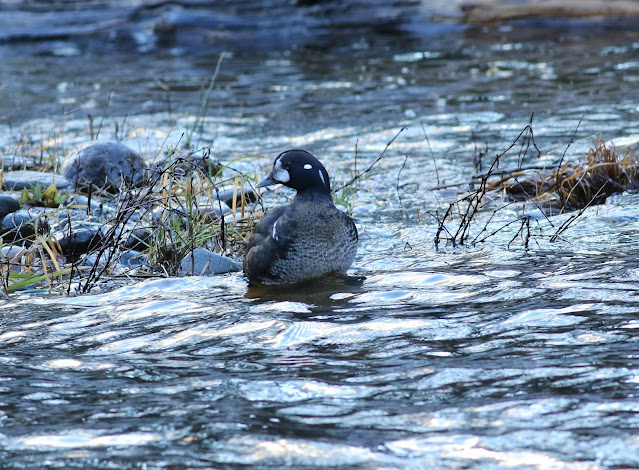 Showing very well in late afternoon, and in better light. 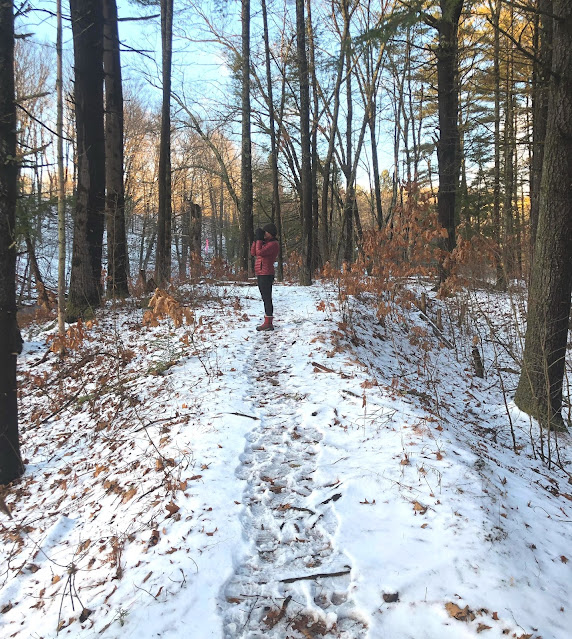 Susannah finding and enjoying the Harlequin in late afternoon. 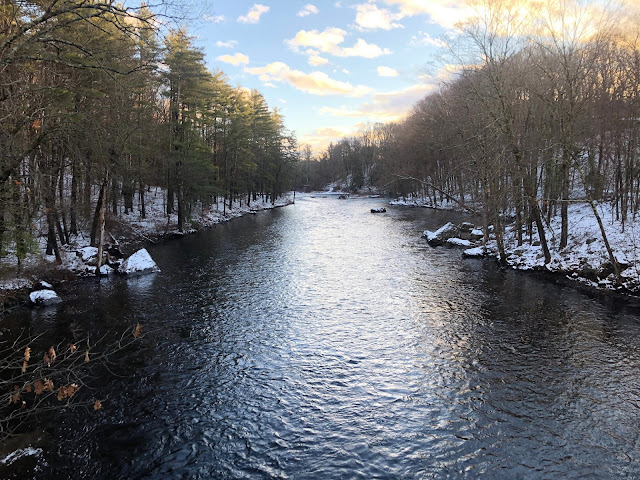 Looking upriver from the bridge over the Millers River. The Harlequin was visible from this spot in late afternoon. 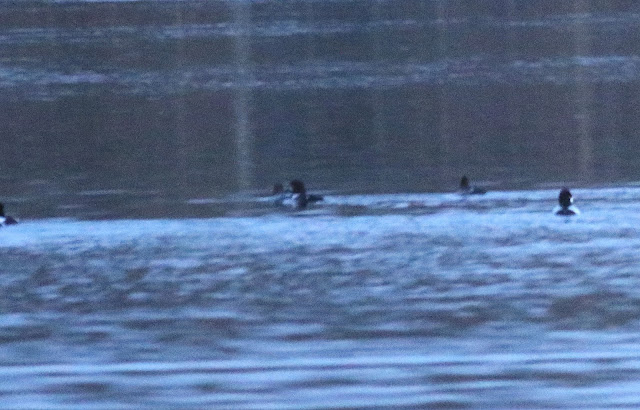 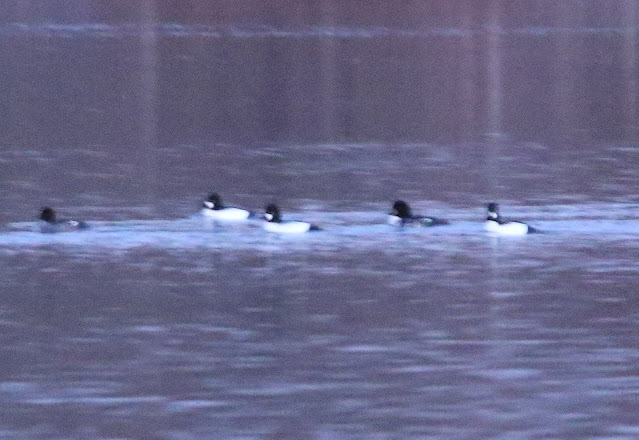 Barrow's Goldeneye (second from right) - first-winter male, Turner's Falls power canal, Franklin Co., MA. January 2nd, 2021.
The same individual that showed up on Christmas Day but flew in late today, too late in fact for photos.
Even so, very cool to relocate this bird after a long pause of eight days.

Thank you so much for verifying what we saw on New Year's Day. Spectacular photos! I hope you enjoyed watching him in the wild water as much as we did. He not only dove to search for food, but I observed him clearly playing in the white water, splashing around, then jumping onto a boulder over and over. Thanks again.

James I cant believe how similar that bird is to the 2015 Aberdeen Harlequin Duck - see here-
https://boulmerbirder.blogspot.com/search/label/Harlequin%20Duck

Its a dead ringer in circumstances too!