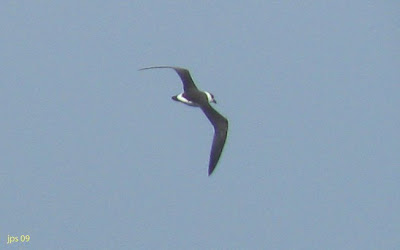 Black-capped Petrel Pterodroma hasitata. Found on the July 18th BBC Extreme Pelagic at around 10:50am, North-west of West Atlantis Canyon, MA. About the fifth state record. Digibin images taken using Canon Powershot A590 hand held to Leica 8x42 binoculars. Just a reminder that you can view any of these images at a larger size with a single click on the image.

This bird was just one element of an excellent bird-rich adventure at sea. Overall, it was one of the better (or maybe even the best!) BBC Extreme pelagics that I've been on. Aside from the Black-capped Petrel, we had a fabulous display of Cory's Shearwaters, a state record count of Audubon's Shearwaters and a super showing of Leach's Storm-petrels. The latter, at times, offered some exquisite direct comparisons with Wilson's Storm-petrels.

On the down side, we could only find one jaeger all day - a dark-morph, sub-adult Pomarine and I had two possible Band-rumped Storm-petrels leaving a flock of resting Leach's Storm-petrels which were quickly lost to view behind the bow of the boat before I had a chance to call them. A North Atlantic Right Whale sadly entangled in fishing gear provided the most sobering sight of the day.

Special thanks to Ida Giriunas for making these trips happen, and to the leaders, Rick Heil, Jeremiah Trimble and Steve Mirick. Rick Heil's constant vigil at the front of the boat has to be seen to be believed! Also, a special word of thanks to travel and field companion Nick Bonomo who managed to grab a last-minute opening on the trip and couldn't have been more pleased with his decision to come along!

A complete, detailed post of the day's events by Rick Heil can be found here on Seabird News; Steve Mirick has put together a map of the route taken on the trip; excellent photos of the Black-capped Petrel and other species from the day can be seen in Jeremiah Trimble's photostream; and a nice account of the trip along with a map of the Black-capped Petrel's location can be found on Nick Bonomo's Shorebirder blog. 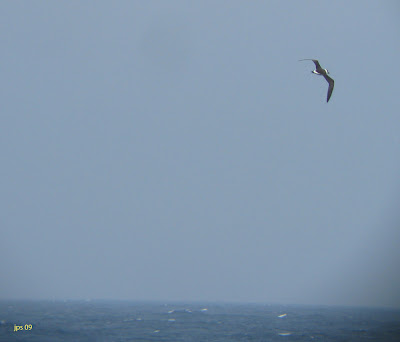 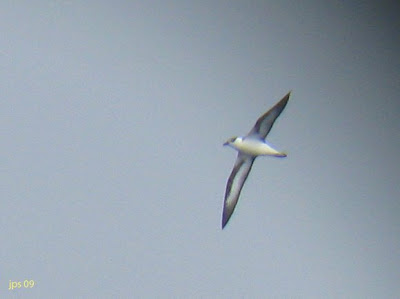 Black-capped Petrel Pterodroma hasitata. Initially discovered during attempts to relocate the first Audubon's Shearwater of the day which had been found just seconds earlier by Derek Lovitch. The bird made relatively close pass of the boat before gliding away at speed. Remarkably, Captain Joe Huckameyer managed to chase the bird down before it gave a second, even closer pass about four minutes after the first observation, thus allowing just about everyone on board to catch up with this most exciting pterodroma. 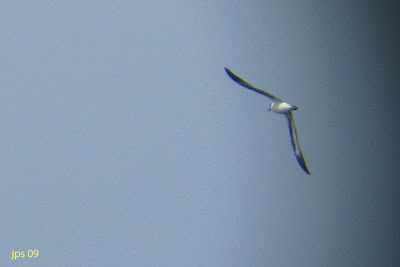 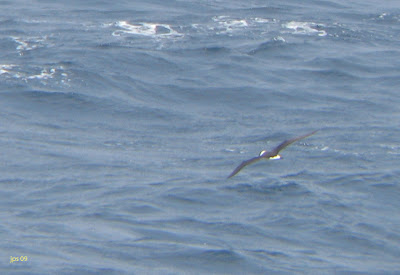 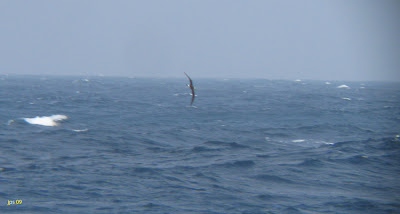 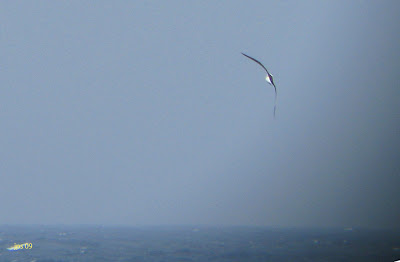 Some nice shots of a great bird.

I am confused a bit about how "state waters" work for birders. Legally, state waters only extend 8 miles offshore. For birding purposes, though, I understand the need to credit sightings made further than 8 miles offshore to a certain state, but I'm a bit unclear on how it works.

The three Black-capped Petrel reports shown on the eBird map (http://birdingonthe.net/gmaps/eBirdMap.html) are in different locations, two of which could possibly be seen as closer to Long Island, NY or Rhode Island than Mass. Is the measure of which state's waters a bird was seen in which state is closest? Is it which port the boat left from?

I understand that it is much more difficult to tell where you are when you're out on the water, but it seems that while there is a lot of exactitude in land-based state bird reports, there is much less offshore...but I probably just don't know the rule.