Raw, frigid conditions continue. Temperatures didn't climb above freezing all day making any type of birding difficult. After a relatively fruitless drive around the Hadley fields I ended up back at the UMass campus pond. The first 20 minutes were rather dull but soon streams of Canada Geese started flying in and landing on the ice and the only remaining patch of open water. Around 10am, two Greater White-fronted Geese flew in together with a small flock of Canada Geese. Both of these birds were easily separable from each other and may well represent two different subspecies. 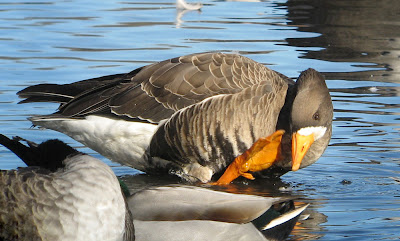 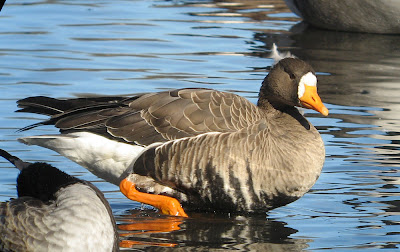 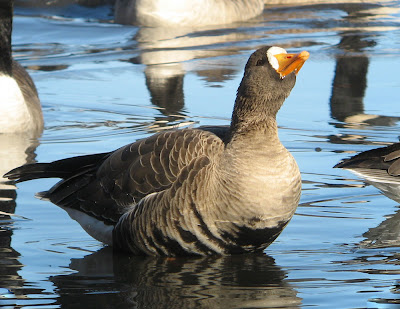 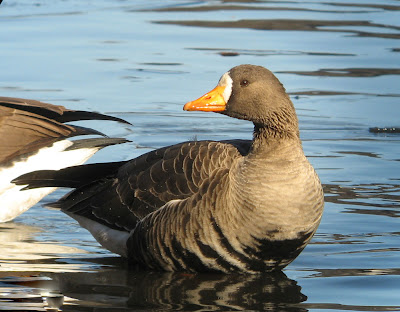 Greater White-fronted Goose - Images 1 - 4. This was the larger of the two birds being rather darker brown with a thick-necked appearance, an extremely bright orange bill, a narrow white stripe along the flanks and narrow pale tips to the upperwing coverts - all suggestive of the Greenland subspecies 'flavirostris'. 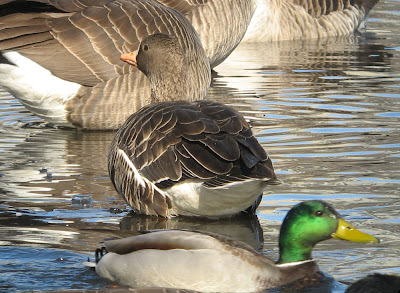 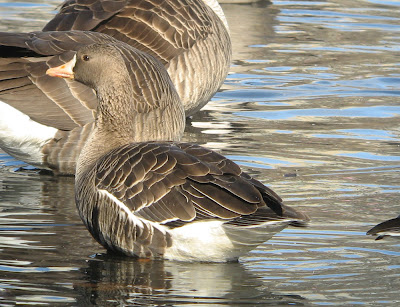 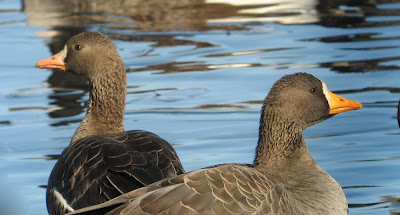 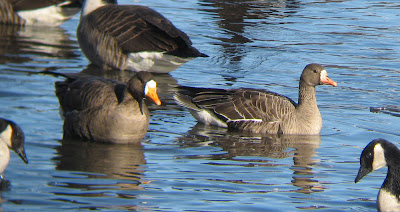 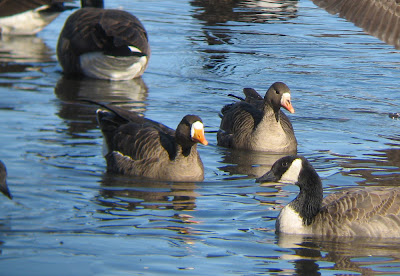 By way of coincidence, David Sibley has been looking at Greater White-fronted Geese recently near his home in Concord, MA. His blog entry includes a nice summary of the features of 'Greenland' White-fronted Geese with comparisons to North American-types.
Here's the link to his excellent blog:
http://sibleyguides.blogspot.com/2008/11/identification-tips-for-greenland.html

the bird GWFG with the pinkish bill looks like birds I see regularly in Holland. Not sure how the other US-subspecies look like.

Good to hear from you! I would agree that the bird with the pinkish bill does resemble albifrons but there are reputedly three subspecies breeding in North America, not including flavirostris, and all of them have pinkish bills! There seems to be very little information on how to separate European and North American birds. Do you know of any goose watchers in Holland that might have looked at this problem?

Give my best to Roelf.

Hi James,
as Vincent stated, the pink-billed bird would not draw any birder's attention here in Europe as being unusual, so who knows, an albifrons?
As far as I know, the bill's shape and especially length seems to be the only reliable character to differentiate between frontalis and albifrons.
However, albifrons also shows a lot of variation regarding bill shape here in Europe and as there is apparently a clinal change from albifrons in the West to frontalis in the East of the breeding range in Eurasia, some of the European winter birds might actually be close (or closer?) to frontalis.

Your orange-billed bird looks like it escaped an identification article on Greenland White-fronts, so congrats on that!!