This 2nd/3rd cycle Slaty-backed Gull was discovered in the smallish gull roost at Barton Cove on the evening of February 20th with about 500 other large gulls present. Initially, I picked it up at distance resting on the ice near the dam viewing from the Turner's Falls side of the river . I drove around to Gill hoping for better views only to find the bird roosting until all the gulls were flushed by a Bald Eagle. The gulls then spent the next 30 minutes in the air and I didn't see the Slaty-backed again. I decided to hold back from making a full alert primarily because I hadn't seen all the critical features well enough to be certain of the identification.

On Feb 21st, I returned to the site along with Susannah Lerman, Nick Bonomo, Brian Kane and Scott Surner. It was actually Nick who spotted the bird first, just after a late arriving flock of gulls came in from the North shortly before 5pm. From that moment we had the bird in view and watched it from both sides of the river until we left at around 5:45pm.

Amazingly, this is the same individual Slaty-backed Gull that spent a week at the Windsor/Bloomfield Landfill during February 9th - 13th, which can be identified by comparing the plumage and bare part features here.

If accepted, I believe this will be the first record for Interior Massachusetts. 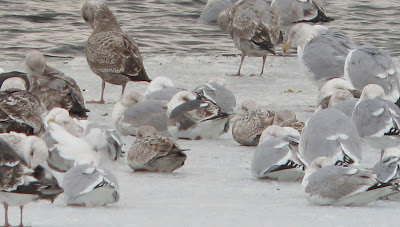 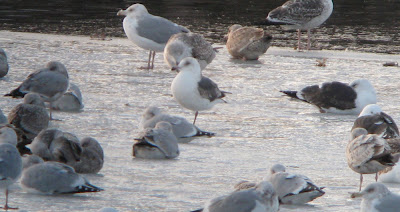 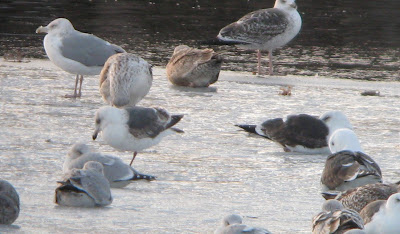 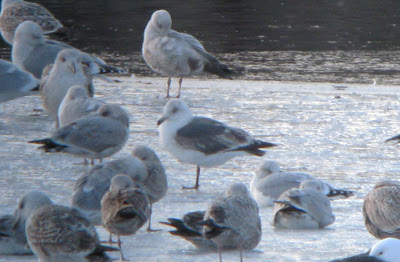 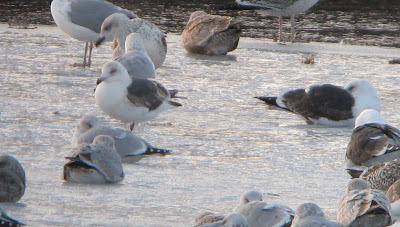 Slaty-backed Gull - 2nd/3rd cycle (center). Reasonable views at dusk from Riverview Drive in Gill, Franklin Co., MA. Feb 21st, 2009. Having seen the bird well in strong sunlight from the Turner's Falls side of the river we drove around to Gill around sunset and decent looks there. Glare can seriously hamper the viewing from Riverview Drive on a cloudless day as it was on the 21st.